To Tame a Land 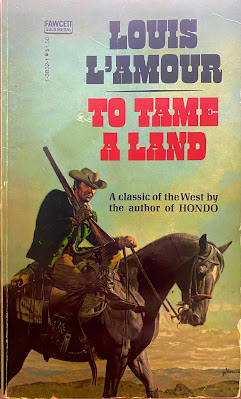 From 1950 to 1987, Louis L'Amour produced some of the finest westerns of all time. Considered America's storyteller, L'Amour's novels and short stories have been transformed into audio books and successful films. A number of his first paperback books were published by Fawcett Gold Medal. I recently bought the first edition of To Tame a Land. It was published by Fawcett in 1955 and was L'Amour's 13th career novel.

After his mother died, Rye Tyler and his father join a wagon train journey across the harsh Midwest. During the trip, Rye's father is murdered by Native Americans after being abandoned. A savvy and experienced cowboy takes Rye under his wing and mentors him into manhood. Rye learns how to shoot, fast-draw, hunt, play poker and farm, all of the necessary skills a young man must possess to survive in the late 1800s. Eventually Rye meets a young girl named Liza and the two develop an enduring friendship.

After shooting a man in self-defense, Rye is forced into a life of solitude in the mountains. L'Amour's narrative allows readers to follow Rye's transformation from innocent boy to hardened frontiersman. Rye's fast-draw earns him a deadly reputation that he re-enforces in numerous towns. Rye's life becomes a prosperous one as he joins a cattle drive, becomes a cattle owner, and then later becomes a town marshall. But, his true quest is locating Liza's whereabouts. When he learns she has been taken by outlaws, Rye becomes a savage hunter.

At 143 pages, To Tame a Land feels more epic than its shorter length. In many ways it's the proverbial coming-of-age story, the traditional "make a man out of him" through violence and upheaval. I found that L'Amour's writing seemed misplaced with many storylines and outcomes packed into the propulsive plot. It's as if L'Amour didn't really know what the story was but had several ideas that intertwined. Because of that fragmented presentation, To Tame a Land is one of the rare L'Amour novels that I didn't care for. There's better westerns out there.