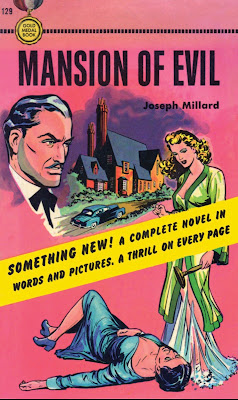 By the middle of the 20th century, publishers began experimenting with their consumers by offering different formats for books. Instead of relying on a slim comic book, the idea of a "graphic novel" developed. The idea was to offer more text and story, essentially creating a longer comic book narrative. These new graphic novels wouldn't possess the standard internal advertisements and predominantly were one-shots. They weren't necessarily part of a long, continuous series. With this new marketing, the dominant paperback publisher of the time decided to test the waters.

In 1950, Fawcett Gold Medal published their one and only graphic novel, Mansion of Evil. This 129th Gold Medal paperback was authored by Joseph Millard, a talented writer who wrote science-fiction, mystery, and westerns. His most popular literary work was the Man with No Name, an eight book series of westerns based on the three Spaghetti westerns starring Clint Eastwood.

In a clear tribute to author Brett Halliday (real name Davis Dresser), Millard's protagonist in Mansion of Evil is Beth Halliday. She works as an exhibitor at Melton's Art Gallery. Her fiance is a high-profile reporter named Larry Brennan. Beth's most recent art auction is the work of a notable painter named Maxwell Haimes. The artist stays out of the spotlight and remains secretive to many of his closest associates.

When Beth and Haimes are introduced, Haimes becomes excitable and slightly unstable. He advises Beth that she resembles his former wife. Additionally, he explains that his former wife, who was accused as a gold digger, was run off by his agent, leaving him heartbroken. A large portrait painting of her is left unfinished, but due to the remarkable resemblance Beth has to his wife, he can use her as a model to finish this masterpiece.

In a fast-paced sequence of events, Haimes grabs Beth and promises to pay her $500 if she will quickly accompany him to his studio to finish the painting. Beth accepts the proposal, but becomes frightened when Haimes advises that she will be gone a few days and that she can't return to her apartment to pack any of her belongings. Escalating the fear, Haimes drives Beth to a mansion in the country - a mansion that he claims no one knows he owns.

Millard's mystery novel is a combination of suspense and horror with an overlapping central question - who is Laura? Readers are teased throughout the narrative as Haimes continues to refer to Beth as "Laura". Soon, Beth is spiraling into a sea of chaos as Haimes promises two associates that he will be throwing Beth down a massive staircase to prove her death was an accident. When a nurse sedates her, Beth realizes she's about to die in this mansion of evil.

Millard's problem is that he doesn't provide enough information to keep the reader hooked. He ends each chapter with some captivating event that suggests all will be revealed in the next chapter. But, Millard hesitates to offer any answers to so many puzzling questions. It's written as though readers are waiting a full month before the next issue. Instead, it's just a page turn to the next chapter. I'm not sure why the story was structured this way or the reason why Millard leaves the carrot dangling for so long. By the time everything is revealed, I had lost all vested interest.

If you love mysteries where readers are totally baffled by the events for two-thirds of the book, then Mansion of Evil will please you. I needed something more to keep the pages turning. Instead of answers, there were just more questions. No thanks. You can read this book for free HERE.