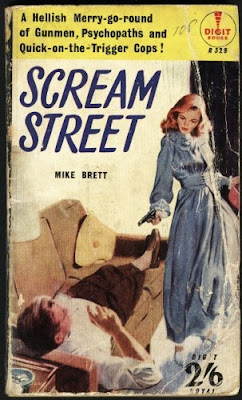 Before authoring the successful Pete McGrath mysteries, Mike Brett (1921-2000) wrote a two-book crime series starring a hard-luck bookie named Sam Dakkers for the Ace Doubles imprint. Both books have been reprinted - again as doubles - by Oregon publisher Armchair Fiction. I recall enjoying the second book, The Guilty Bystander, so I figured I’d try the first installment, Scream Street, from 1959.

Sam the bookie is our narrator, and the opening paragraph finds him witnessing a guy bashing a lady’s face on a corner sidewalk. A geyser of blood and the sickening thud of a human skull bouncing off concrete begin the action for both Sam and the reader. Against his better judgement, Sam comes to the lady’s aid by dispatching the thug and bringing the lady back to Sam’s apartment and temporary safety. The girl’s name is Joan and she had been lured to a warehouse by the thug who tried to rape her under some very odd circumstances. Could there be an organized rape ring at work?

Stemming from this encounter, one violent confrontation leads to another for Sam. Dead bodies begin to pile up resulting in Sam running from both the thugs and eventually the police. Yes, this is one of those noir novels where the protagonist needs to solve a mystery to save his own hide from a presumption of guilt. Sam is an unlikely hero who gets his ass kicked, stomped and shot in nearly every chapter. For Sam, this ordeal is less about a quest for justice and more about keeping his bookmaking business intact. Catching bullets and saps to the back of his head is a small price to pay for Sam’s return to normalcy.

Sam is a very fun character to follow as he bumbles toward a solution. Without question, Scream Street isn’t a crime fiction classic, but it was a light and easy read that never fails to hold the reader’s attention. One quibble: the paperback ends with the obligatory scene with the villain delivering an unbroken monologue explaining the criminal scheme from beginning to end rather than just plugging our hero with a bullet and moving on. Even in 1959, this was a played-out literary trope.

But who cares? You’ll be smiling through every page of this cliche-filled short novel. That counts for something. Check this one out if you want a quick and breezy read.