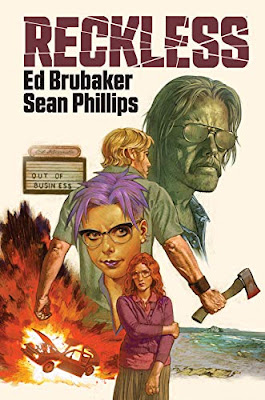 Maryland native Ed Brubaker (b. 1966) is both an artist and comic writer. It would be difficult to browse any comic book store and not find a title written by him, or one to which he has at least made a contribution. Serial titles such as Captain America, Batman, Daredevil, X-Men and Sandman occupied Brubaker for more than thirty years. Beyond superheroes, Brubaker loves crime-fiction and what he describes as those painted cover paperbacks that his father liked to read. Due to his love of the crime-fiction genre, Brubaker teamed up with prolific U.K. artist Sean Phillips (Hellblazer, Judge Dredd) to write a number of awesome graphic novel titles like Sleeper and Criminal. One of their most recent collaboration is a graphic novel series called Reckless. I'm starting with Reckless Vol. 1., which was published in December of 2020 by Image.

The first thing you need to know is that Reckless was written for the 1970s and 1980s men's action-adventure and crime-fiction fans. If you love David Morrell, Robert B. Parker, Jon Messman, and Lawrence Block, Reckless is for YOU. The basic premise is quite simple. Ethan Reckless is the lone hero who performs complicated tasks for money. It's not that different than the 1940s and 1950s private-eye books, but Reckless isn't a licensed detective and he is mostly working illegally. Reckless is similar to Lawrence Block's Matthew Scudder character in that regard. The icing on the cake is that these books are set in California in the early 1980s.

Ethan Reckless became an FBI agent in the early 1970s. In flashback scenes, Brubaker explains that Reckless was working undercover to infiltrate a group of Vietnam War protesters. Mostly these groups were peaceful, but this particular assembly is planning on bombing large portions of the city. When Reckless attempts to stop a bombing, he's caught in the blast. The explosion creates some facial scarring and Reckless loses portions of his memory. After that incident, Reckless eventually finds himself at odds with his fellow FBI colleagues. He eventually quit with three years of pension. Once that ran out, Reckless began solving problems for people. In the early days he describes his "office" as just him and his surfboard.

Fast-forward to Los Angeles in 1981 and Reckless now works out of an old abandoned theater. He has a phone number that people can call to report their problems. His female punk rock assistant handles the calls and offers Reckless the job selections. Reckless is shocked when Rainy advises him that someone on the phone is asking for Donovan Rush. This was his old undercover name when he was working the protest bombings.

After obtaining a time and place, Reckless arrives at a roadside diner to find that his old flame Rainy is the one asking for him. She was one of the protesters that Reckless fell in love with prior to the explosion. She explains that she was involved in a bank robbery in 1974. The group stashed the money with a promise that they would all lie low for a few years until the heat died down. Once she was able to locate her partner, Rainy learned that the money is gone and he's now living a posh life in northern California. She wants Reckless to retrieve the $100,000 she's owed from the robbery.

Reckless is a stylish throwback to the books we read, review, and love here at Paperback Warrior. It's smack-dab right in our wheelhouse. This first volume is 150 pages and is just a well-written, action-packed narrative with plenty of twists and turns. The art is exceptional with plenty of violent details - this isn't for the squeamish. The bank heist is really just a small portion of the book, instead the storyline weaves in and out of the FBI investigation, CIA drug runners, a phenomenal origin, sex, and a gritty, Hell-bent revenge angle. If you've been reading Paperback Warrior reviews (or listening to the show), trust me when I tell you to read this book. You won't be disappointed.

Note - The second volume of the series is called Friend of the Devil and is set in Los Angeles in 1985. Like the first volume, there's retroactive storytelling from the 1960s and 1970s that play a prominent role in the 1985 job. The third book is called Destroy All Monsters and will be released in October of 2021.