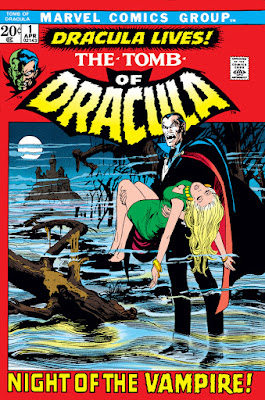 In 1971, the Comics Code Authority eased its rules and regulations on horror comics publications. A lot of editors started testing the waters with different heroes and supernatural villains. Marvel Comics decided this would be the perfect chance to explore a more traditional vampire character. Discovering Bram Stoker's Dracula property in the public domain, the publisher developed The Tomb of Dracula. This series lasted from April 1972 until August 1979. I decided to check out the series debut. It was written by Roy Thomas and Stan Lee and penciled by Gene Colan.

Frank Drake inherited $1 million of his late father's money. He explains to readers that it took him a mere three years to blow all of it. Drake's lover is Jeanie, a beautiful woman who doesn't care about his lost fortune. When Drake talks about an old castle with his best friend Cliff, all three characters end up in a real estate quest.

Drake explains to Cliff that he's actually related to the original Count Dracula. The lineage of his family can be traced back to the original Dracula family. When his ancestors moved out of Romania, they changed their name to Drake. What's left behind is an old diary and a monolithic castle in Transylvania. Drake's father failed in his attempts to sell the "cursed" property. Cliff suggests that this is a golden opportunity for Drake to cash in on his iconic Dracula heritage and open the castle as a tourist destination.

When the book begins, these three people struggle through the rain trying to locate the castle. When they stop in an old inn, they discover that none of the bar's customers are willing to discuss the castle. After failing to find a sufficient means of transport, an old man agrees to bring them by horse and carriage to the property. But, just outside of the castle, he becomes skittish and drops them on the road.

The narrative increases its pace with a heightened sense of dread. As the three investigate the ancient, abandoned castle, the tension and intrigue becomes a thick veil. In the castle's cellar, Cliff discovers an old skeleton with a wooden stake piercing its dry, brittle bones. Is this one of Drake's ancestors? When Cliff disturbs the skeletal remains, he awakens a fiendish vampire. Is this the Hellhound known as Count Dracula?

While this issue doesn't capture the true essence of a Hammer Horror film, the colors and the atmosphere certainly pay homage to the traditional vampire tale. As a story of origin, Lee and Thomas excel in creating a captivating story that is not as horrific as the legend of vampires itself. I understand that subsequent issues invoke a Hammer Horror feel, but for the most part this issue is a dramatic pairing of adventure and romance. By today's "scary" horror standards, The Tomb of Dracula pales in comparison. However, as a nostalgic return to a more innocent age, I loved it.