In Deep (aka Whiteout!) 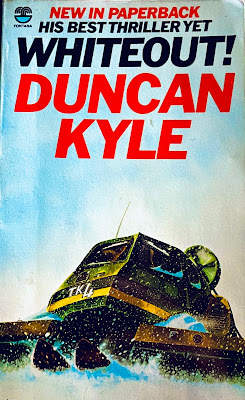 British author John Franklin Broxholme (1930-2000) used the pseudonym Duncan Kyle to author a number of high-adventure novels in the 1970s and 1980s. Typically, his novels includes individuals that become unlikely heroes during a dangerous situation. My first experience with Broxholme is his 1976 novel In Deep. It was originally published in hardback and then later re-titled and published as Whiteout!.

Presented in first-person narration, In Deep stars Canadian sales executive Harry Bowes. He's representing his employer's advanced machinery, the high-performance TK4. The vehicle is an advanced hovercraft built for harsh, frosty environment. After successful trials in Canada, Bowes and the TK4 have been transported to Greenland's ice cap. At 7,000 foot heights, the blizzards and Arctic winds will prove to be fierce competition for the new TK4.

Bowes is in this wintery Hell to introduce the vehicle to the U.S. Army Corps of Engineers. This is a group of 300 men stationed at Camp Hundred, a research station that is mostly underground. Readers are thrust into the camp's routine as Bowes becomes acquainted with the officers and gains some camaraderie with the men. But, these introductions and sales presentations are severed quickly. Thankfully, In Deep isn't about a sales pitch or a test drive. It's a mass murder mystery.

Like a 1980s slasher flick, the men at Camp Hundred are meeting grisly deaths. Someone is killing these men one by one while simultaneously cutting their supplies. The well is poisoned, reactors destroyed, runway lights extinguished and food is contaminated. At first, Bowes and the camp believe these events are freak accidents. But, as the bodies begin to pile up, it seems that a killer is on the loose and Bowes may be the next victim.

In Deep was nearly a one-sitting read for me. That's unusual considering my busy schedule with work, family, this blog and podcasting. But, Broxholme's narrative is just so addictive. It's the traditional murder mystery, but placed in this unusual location. Often, I was reminded of John Carpenter's excellent survival horror classic The Thing. This isolation and atmosphere is permeated with impending doom. Bowes becomes the credible hero, but thankfully the author creates this character in an average way. There's nothing special about Bowes other than his determination and will to survive.

If you love high-adventure, but have grown tired of stolen Nazi gold or rogue agents, Broxholme's In Deep is written just for you. Highly recommended!