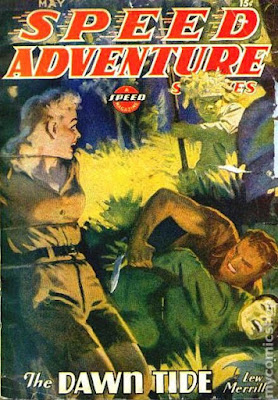 Author Victor Rousseau Emanuel (1879-1960) was a British novelist that authored a number of short stories for the early magazines and pulps. He used pseudonyms like Victor Rousseau, H.M. Egbert, and V.R. Emanuel for publications like Strange Tales of Mystery and Terror, Super-Detective, Weird Tales, and Argosy. Under the pseudonym Lew Merrill, he authored more sexually suggestive work. It's under this name that I first discovered the author. I found the May, 1944 issue of Speed Adventure Stories online and it contains a short story by Emanuel called "The Dawn Tide".

On Eastern Canada's St. Lawrence Gulf Coast, Yvette and her husband Armand are lighthouse keepers. The windswept coast is battered by brutal storms and piercing ice, making life very difficult for 27-year old Yvette. To complicate matters more, her husband Armand lost the use of his leg in WW1. Thus, Yvette is mostly administering all of the lighthouse's functionality. When faced with a German prisoner, her burden becomes an overbearing weight she's forced to contend with.

Due to WW2, the lighthouse serves as a beacon for many Allied ships coming and going. Most of these ships are floating prisons for German prisoners of war. On a clear night, Yvette hears a man screaming for help in the treacherous sea. When she brings the man inside, she learns that he is an escaped German prisoner.

The man introduces himself as Volksmann, then becomes increasingly belligerent when he discovers there's only one bottle of brandy on shore. The tension increases when the man states he will be stealing one of their boats the next day for an escape attempt to New York. Armand is crippled and can do very little to stop this German soldier. But, when Volksmann drags Yvette upstairs to rape her, the story takes a very violent, yet thrilling turn.

Merrill's descriptive locale really enhances this moody, suspense thriller. The idea of these two people trapped with a maniacal Nazi soldier is terrifying. The author's use of Yvette as the primary hero is admirable considering the 1940's era. It's stylish, unique and a compelling read. You can read the story for free right HERE.