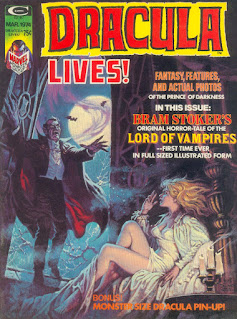 Gerry Conway (b. 1952) is a prolific comic book and screenplay writer. On screen, Conway has written or produced countless shows ranging from G.I. Joe to Perry Mason. In comics, he authored DC’s Justice League of America for eight years and helped create the Punisher character for Marvel. I’ve seen and read a lot of Conway’s work, but I wanted to try one of his text-only short stories. Thankfully, I found one called "Demons in Darkness". It was published in the fifth issue of Dracula Lives! (1985). This was a magazine published by Marvel Comics imprint Curtis. The story includes frightening artwork by Pablo Marcos (The Mighty Thor, The Avengers).

"Demons in Darkness" is presented in first-person narration from Mason, a young man living in the small town of Tarrington, Rhode Island. Mason is working in a cozy hotel when a guest appears asking for accommodations. The man is dressed in a long black cloak and signs the register as Blake. Mason's boss Lucas seems to be hypnotized by Blake immediately. Who is this strange guest? 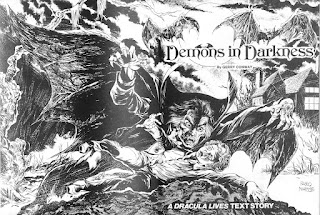 When Mason discovers that Blake's suitcase is actually a coffin, he begins to rely on vampire mythology. After a daytime investigation, he learns that Blake is actually the iconic, fiendish Transylvanian vampire known as...Dracula. Mason discovers that Blake/Dracula has hypnotized part of the small town on a quest to find the location of an old abandoned mill. In the backstory, Mason explains the significance of the mill and its rumored connection to the supernatural. Will this small Rhode Island town host an epic showdown between the living and the dead?

Conway's story is a rich, traditional horror tale that features one of the most iconic vampires of all-time. Since Marvel is the parent company, this version of Dracula is the same one featured in the admired, lengthy comic series The Tomb of Dracula (1972-1979). Mason's first-person narration is written in a way that matches the character's young age, making this a more personal account of these horrifying events. If you loved Stephen King's Salem's Lot (1975) or the film Fright Night (1985), "Demons in Darkness" is a must-read.