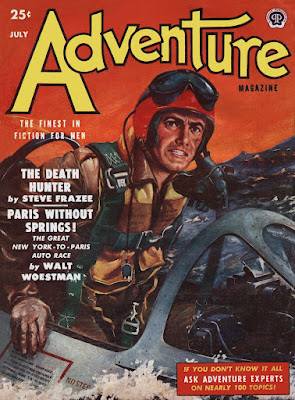 Steve Frazee was a prolific western author that served as president of the Western Writers of America. Before authoring full-length paperbacks in the 1950s, Frazee was a heavy contributor to the western and adventure pulps of the 1940s. We've covered several of his books and stories here on Paperback Warrior, so I was happy to locate another of his short stories. "The Death Hunter" appeared in the July, 1952 issue of Adventure Magazine.

When the story begins, Buchanan (no relation to William Ard's character) is boarding a train toting a hunting rifle. But, he doesn't plan on hunting game. Instead, his target is a man named Roy Sargent. In the backstory, readers learn that Buchanan served in WW2 with a fellow named McKee. During a fierce shoreline battle, Buchanan became badly wounded. McKee saved Buchanan by hefting him over his shoulder and racing for the safety of a boat. Because of this, Buchanan feels he owes McKee his life.

Months ago, Sargent trespassed on McKee's farm, hunting birds. McKee kindly asked him to leave, but there was a disagreement. When McKee was found shot to death, clues pointed to Sargent as the murderer. After a police inquiry, there wasn't sufficient evidence to prosecute Sargent. When Buchanan finds that Sargent is headed upstate on a hunting trip, he decides he will bring about his own form of justice.

Frazee's dark tale is one of revenge, but it teaches an important lesson on trust and forgiveness. The story takes some unexpected turns with character development that quickly escalates as these two characters find themselves in the depths of the wilderness. I was pleasantly surprised by the story's finale and really loved what Frazee was able to accomplish over such a small word count.

You can read a copy of this story, as well as the entire magazine, HERE.