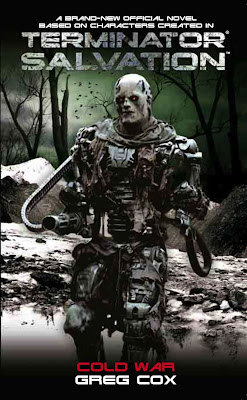 I've enjoyed the entire series of Terminator films. I remember watching Terminator 2: Judgment Day on VHS back in the early 90s and was astounded by the storyline and special effects. I experienced mixed reactions on Terminator 3 but overall, I thought it served its purpose. Those two films are important for my review of Greg Cox's Terminator Salvation: Cold War (2009). This novel is set in the time period between the second and third films. This was the day Skynet started World War 3. Cox chooses the year 2003 to place the story's action.

The book's narrative includes a Russian submarine firing on Alaska in retaliation for Moscow's bombing. The submarine Commander hears an urgent message broadcast by John Connor (the series hero). The radio message explains Skynet's hostile takeover and the need for humanity to unite to combat the machines. Later, the Commander and his crew team up with the Resistance forces to fight Skynet.

The events in the book occur over a 15 year period. Additionally, Cox's narrative also simultaneously presents events in 2015 from the perspective of a Russian resistance force in the Alaskan wilderness. They are attempting to destroy a Skynet train that is transporting uranium to Canada to improve weapons.

The book describes some awesome scenes of T-600 machines fighting the Russians in the snow and forest. I think this would have looked fantastic on film while also presenting a different look to the franchise. The book also includes the familiar Hunter-Killer machines and some really unique snowmobile Terminators - T-600 torsos mounted on snowmobile treads.

Greg Cox is no stranger to movie and television tie-in novels. He has authored books in franchises like Buffy the Vampire Slayer, Star Trek, Underworld, Roswell and many others. I felt that with Cold War, Cox was able to deliver an alternative look at the Terminator machines while still creating an action-packed story. If you are a fan of these films or graphic novels, you should find this book enjoyable.