The Girl with No Place to Hide 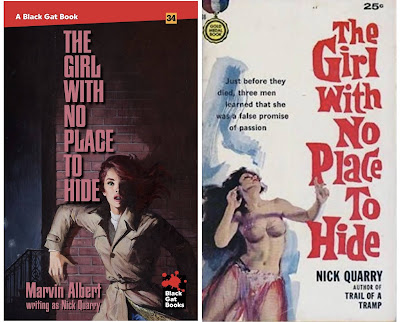 Between 1958 and 1961, Philadelphia native Marvin H. Albert (1924-1996) employed the pseudonym Nick Quarry to write a six-book series starring a hardboiled Manhattan private detective named Jake Barrow. The series has been largely lost to the ages until a recent resurrection by Stark House imprint Black Gat Books. The third installment, 1959’s The Girl with No Place to Hide, is back as a mass-market paperback for modern readers to read and enjoy.

Jake is our narrator for this taut 185-page mystery. After leaving a strip club at 2:30 in the morning, our hero witnesses a woman – a real dish, by the way – being dragged into an alley by a thug. Jake dispatches the mauler, saves the damsel in distress, and brings her to his apartment for safekeeping. Her name is Angela, and she’s filled with secrets. Angela is convinced, with good reason, that someone is trying to kill her. However, she doesn’t trust Jake enough to share the complete story. Jake steps out of his apartment for a few minutes before returning to find that Angela has disappeared.

Without a paying client, Jake takes it upon himself to find Angela and learn who is trying to kill her and why. He makes a logical leap that her threat is somehow tied to a grisly murder of a newspaper ad man around the same time and leverages his relationships with NYPD homicide to get the inside scoop. There’s a side plot involving a middleweight prizefighter with an approaching title bout. There’s also wiretaps, heaving breasts, thugs who kill, thugs who need killing, dirty cops, love triangles, torture, extreme violence, and 1950s stylized sex. No joke, this paperback has something for everyone, and the influence of Mickey Spillane’s Mike Hammer shines brightly throughout every page.

As a character, Jake is a hardboiled archetype who loves the ladies, booze, and using his gat when pushed too far. Albert is an unsung hero of the paperback original era who was equally proficient in the crime and western genres, and The Girl with No Place to Hide presents the author at the absolute top of his game. The mystery and its solution were perfectly crafted with enough red herrings to keep the reader guessing until the satisfying solution. Let’s hope this reprint sells like hotcakes, so Stark House/Black Gat bring back more Jake Barrow mysteries. Highest recommendation.

Although The Girl with no Place to Hide is the third installment in the Jake Barrow series, the paperbacks can be read in any order. Here’s the original series order – all published under the Nick Quarry pseudonym by Fawcett Gold Medal: