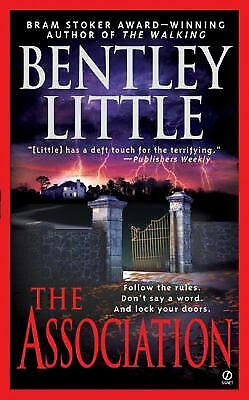 Bentley Little (b. 1960) was born in Mesa, Arizona. He earned degrees in communications and comparative literature at California State University Fullerton. His first novel, The Revelation (1990), won a Bram Stoker Award for best novel by a new author. Since then, Little has averaged nearly one horror novel per year since 1990. I've had the opportunity to read many of his novels, including The Association. It was originally published in 2001 by Signet and most recently has been reprinted by Cemetery Dance.

In the opening chapters, Barry and Maureen move from Los Angeles into a gated suburban community in Utah. Upon moving into their new house, Barry and Maureen receive a book of "conditions, compliance and restrictions" regarding the Homeowners Association that they are required to comply with. Unfortunately, with the hustle and bustle of moving in and becoming situated in their new home, the couple fails to read it. They are later shocked when they discover what type of community they are residing in.

The HOA contract prohibits the two from hosting any minorities in their house. Caucasian is the only prohibited race. Additionally, no one that is gay is allowed to be residents or guests in the community. Further, both Barry and Maureen are prohibited from reproducing offspring. The two quickly find that they aren't allowed to work from home (Barry is a writer). They also find that they must arise bright and early to clear off any pine cones, dead grass, twigs and branches from their property each day. They are prohibited from planting any shrubs, they aren't allowed to paint and they can't include any family photos as home decor.

These outrageous rules and regulations require that each house must have a camera inside that is monitored by the HOA. Barry and Maureen are subjected to sexual harassment and the HOA is allowed to use deadly force whenever a resident breaks the rules. The local police aren't allowed jurisdiction inside, prompting a legal war between the town and the HOA.

Like Little's The Store (1998), The Policy (2003) and The Resort (2004), The Association follows the same formula - corporations wielding authority on unsuspecting people. The novel's sadism is turned down compared to Little's other works, but there are still some violent and unsettling scenes for readers. If you are familiar with this author, you'll find no surprises. The Association is a disturbing horror novel with a unique perspective on home buying.