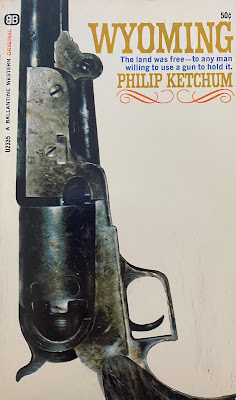 Philip Ketchum (1902-1969) was a top pulp contributor throughout the 1930s and 1940s. Using the pseudonym Carl McK Saunders, Ketchum authored over 100 hard-boiled stories featuring Captain John Murdock, a detective destroying crime rings in fictitious Central City. In the late 1930s, his 12 installment fantasy series Bretwalda was featured in the pages of Argosy. In the late 1940s, Ketchum made the transition to full-length fiction and turned to the western genre. With dozens upon dozens of paperbacks for publishers like Popular Library, Eagle, Fawcett Gold Medal, and Ace, Ketchum is admired for his high-quality western storytelling. The first experience I had with him was his 1967 western novel, Wyoming. The book was initially published by Ballantine.

After the Civil War, Dan Morgan headed west to carve out a frontier living. In Wyoming, Morgan finds a beautiful stretch of wilderness and starts building a home. After clearing land, planting potatoes and constructing a small cottage, Morgan bought horses and livestock. After settling in, two gunmen step onto his property and shoot him. The men burn the cabin and steal his animals.

Shocked by the heinous events, Morgan is left with nothing and forced to walk through the wilderness. He had previously stumbled on an old wagon road and a widowed woman named Cora. At that time, Cora explained that her husband had been killed and that she had no place else to go. She defiantly declined Morgan's help and settled in to wait for help by her wagon. Unarmed, with no supplies or horse, Morgan makes his way back to Cora's wagon to ask for assistance.

Morgan and Cora make a deal. She will provide him everything she has...but herself. In exchange for the horse, wagon, supplies, and valuable gun, the two will form a business partnership. She will help Morgan rebuild in exchange for 50% of the farm's eventual profits. Between a rock and a hard place, Morgan accepts the deal. After the two rebuild the cabin and begin to settle in, the riders come after Morgan again. This time, Morgan and Cora flee to Wyoming City as their cabin and supplies burn again.

Ketchum is a fantastic storyteller and I was glued to the action and propulsive plot. Morgan's desperation to make a living in a rugged wilderness is admirable. When he finds that a land baron named Gilby is cheating potential landowners, the book's second half ratchets up the gunfire and intensity.

Perhaps the most intriguing portion of Ketchum's presentation is the role Cora plays. Unlike Louis L'Amour, Ketchum places more responsibility and value on his female characters. Instead of the traditional hero coming to the aid of the widowed woman, Ketchum spins the narrative. Cora and Ketchum don't immediately have a romantic relationship (if ever), but instead are relying on each other as 50/50 business partners. Cora is iron-willed, independent to a fault, and a tremendous fighter. In the mid-20th century, western authors didn't place a strong emphasis on female characters. I really liked Ketchum's "against the grain" direction.

Overall, Wyoming is a fantastic western chock-full of violence, action, mystery, and a unique character development. It also questions the protagonist - is he vengeful or self-righteous? While not as crafty, I think Ketchum is comparable to Arnold Hano. The two authors have a more abstract presentation of the traditional western formula.