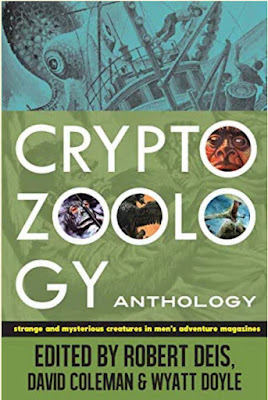 In my I Watched Them Eat Me Alive review, I reminisced about being a kid and watching wacky horror movies that starred nature as the dastardly villain. On any weekend, you could find me glued to TBS or USA Network watching films like Day of the Animals (1977), Grizzly (1976), Empire of the Ants (1977), and Piranha (1978). These movies were so much fun because they put me into a realm of real-world horror. There was a slim possibility that I could meet my end facing a hockey-masked killer at a campsite. But, my own backyard had ants, bees, bear, and leaping squirrels that could easily bring my demise under extreme circumstances.

Thanks to Robert Deis and Wyatt Doyle, the concept of man versus nature is explored within the confines of the literary world. Like their prior volumes, Weasels Ripped My Flesh, the aforementioned I Watched Them Eat Me Alive, and Maneaters, these two literary scholars have been scouring the pages of vintage pulps and men's adventure magazines (MAMs for short) for strange and mysterious creature stories. Combining their efforts with David Coleman (Ancient Lake, The Bigfoot Filmography), the trio edited Cryptozoology Anthology, a 2015 publication by New Texture. It contains a total of 13 stories culled from the pages of True Weird, Men, Sir!, and Man's World among others. The book also contains two informative, introductory articles about creatures in various pop-culture trends and media.

The whole collection is highly recommended, with these stories in particular as solid standouts:

This was originally published in Man's Conquest, August 1959 and it's one of those stories supposedly written by the main character to convey his harrowing, real-life encounter to the reader. In this case, the protagonist and author is Jim MacDonald, a former WW2 engineer that theorizes where a motherlode of diamonds is located in the Mato Grosso jungles of Brazil. To obtain it, he'll need to travel through tribes of head-hungry Indians known as the Morcegos. With the help of an enemy (you read that right) and a sexy babe, Jim finds the diamonds and the truth behind the Morcegos' worship of a strange white beast referred to as The Guardian. The story begins and ends with a furious shootout, and is laced with the traditional escapism these stories are known for. This one will be memorable for a variety of reasons.

“The Man from Another Age”

Like the above story, Mike Flint is listed as the author and the protagonist in this story that appeared in Man's Illustrated, November 1958. The creature at hand is the Abominable Snowman, also known as the Yeti, one of the most popular creatures to appear in pop-culture. Flint and other adventurers form a hunting expedition on Mt. Everest. The story, at about 20 pages in length, documents Flint's struggle with the harsh elements. But, my favorite aspect of the story is Flint's interactions with a beloved character named Billy, a young man hoping to finally overcome his fears after years of living in cowardice. Essentially, it's Billy's story, who arguably could be “The Man from Another Age” instead of the dangerous creature. Again, escapism laced with danger, high-adventure, and terror makes this story a real standout.

With a title like that, how could it not be a riot? I've always liked Jack Pearl's writing, and we've covered several of his books and even devoted a podcast episode to his work. He mostly authored crime-fiction, military-fiction, and biographies. But, he dipped into the Cryptozoology stories in the MAMs, including this wild “non-fiction” article in Saga, May 1963. Pearl describes “real-life” events where humans have been snatched by giant birds, often referred to as Thunderbirds in ancient civilizations. These are crazy, sometimes terrifying stories of man versus nature gone wild. Pearl points out that early American pioneers like Jim Bridger and Daniel Boone have written accounts they've experienced with giant birds. It is far-fetched, unbelievable shock-writing, but it is just so much fun to read. It's a testament to an era of imagination and curiosity. Much like many of the stories featured in this anthology.

These stories all feature wild animals and creatures wreaking havoc on mankind. There's tales of dinosaurs in jungles, sea-monsters terrorizing ships, and more Yeti, Sasquatch, and Bigfoot stories. They are all enjoyable, fast-paced, exciting action-adventure yarns surely to please fans. The artwork on the magazine covers and inner-pages is included in glorious full-color, including artists like John Pike, Jack Dumas, Gil Cohen, Mort Kunstler, and Norm Eastman just to name a few. As a bonus, there's even a hidden story buried inside the book. When searching for it, just be careful where you place your fingers. You never know what hairy, horrific creature you're liable to touch!