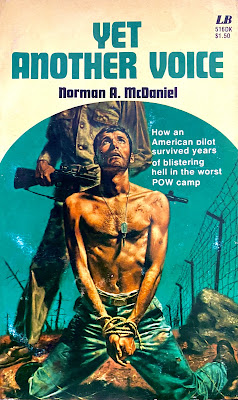 Reading military non-fiction is somewhat challenging for me. The fact is that these are real-life, harrowing accounts of action, adventure, and heroism, far from the fantasy escapism I like to indulge in. But, at the same time, I respect it and value its purpose in revealing freedom's cost, the sacrifices made by veterans, and the historical impact of these accounts. Sometimes they can be uplifting experiences and others a dismal journey into despair and ruin. I mostly read fiction to escape my 9-5 existence, but from time to time I delve into a non-fiction book to ground me to reality. I purchased Yet Another Voice from a friend, a 112 page Leisure paperback from 1975 that is a non-fiction account of the author's six years experience as a prison-of-war in Vietnam.

Col. Norman A. McDaniel, a U.S. Air Force pilot, was shot down with his crew over North Vietnam in July, 1966. In this autobiography, McDaniel explains that he guided his parachute into enemy territory, a deadly landscape that he was completely insulated from in prior war-zone experiences. On the ground, McDaniel, armed with just a .38 revolver, attempted to radio for help before being surrounded by soldiers and villagers. Other than a neck laceration, McDaniel was mostly healthy as he was taken captive and marched miles to a makeshift prison camp. Here, he was tied, beaten, and interrogated before being shipped to one of the most notorious camps, a compound called “The Zoo”.

In a small, windowless cell, McDaniel never knew light from day, and was interrogated, physically abused, degraded, and forced to endure hours of torture at the hands of prison officials. Refusing to break, he was assimilated into prison life, which McDaniel describes as monotonous existence of staring at the wall for hours on end. Eventually, his hopes of freedom evaporate when he is re-located to the more secure and notorious "Hanoi Hilton" prison.

McDaniel spent over six years in captivity. His experiences are well-documented in this book, but told in a casual, storytelling way. There's very little technical nuances in the book, nor is it introduced as a timeline of the author's childhood upbringing, education, and training. The first three pages jump right into McDaniel's fateful day and the years following it. The author describes encounters with other cell mates, meeting his crew in the camp, various routines, and the prison Christmas shows, which were touching moments of solidarity. The book wraps up with McDaniel's arrival back home and the struggles of acclimating back into a normal civilian life.

Beyond just being a testament of courage and overcoming adversity, Yet Another Voice is a wonderful Christian message of God's overpowering strength. McDaniel frequently discusses biblical scripture in the book and how these scriptures motivated him to not only survive the ordeal, but to establish an even closer relationship with God. As a Christian myself, I really cherished these messages to reinforce my beliefs. It was just so powerful. If you enjoy military history, or underdog stories of any kind, then Yet Another Voice is certainly worth reading.