To Venus! To Venus! 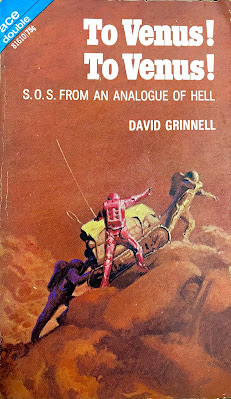 Robert Silverberg said that Donald A. Wollheim (1914-1990) was one of the most significant figures in 20th century American science-fiction publishing. He was the editor for Avon Books between 1947 through 1951, then left to spearhead the new publisher Ace Books. He invented the adored “Ace Double” and spent 20 years as the publisher's editor-in-chief. He later left Ace to form one of the most instantly recognizable publishers in science-fiction literature, DAW Books (Wollheim's initials). But, Wollheim also wrote a lot of science-fiction stories and books, including To Venus! To Venus!. It was published under his popular pseudonym David Grinnell by Ace in 1970. The flip story of this double is The Jester at Scar by Edwin Charles Tubb. Cover art by John Schoenherr.

The book begins with a U.S. Space Agency's crew, led by protagonist Chet Duncan, navigating a difficult task on the Moon's surface. It is presented as a bit of foreshadowing, eventually culminating later in the narrative as Duncan is forced to navigate more challenging tasks on the surface of Venus. Once the crew is back home in CA, Duncan's senior management discusses the next mission.

Russia (then the Soviet Union) made a transmission from what appears to be a communication station on Venus. This would be unlikely considering that the U.S. and world leaders have established that Venus contains an atmosphere that is over 500 degrees. However, the Reds state that the information is inaccurate and that the atmosphere is similar to Earth's. In an effort to gain credibility, and in the fairness of competition, the Americans want their own people on Venus. A three-man crew led by Duncan will train extensively for the flight to Venus and make the voyage. Thus, a narrative is born.

The flight to Venus is somewhat boring as readers endure daily activities, training exercises, and some flat banter between the characters. The only entertaining aspect is that another group of Russians are en route to Venus as well, so the rivalry between the two space capsules is interesting. The Russians are heavily stereotyped, which made the dialogue unintentionally humorous. But, eventually the Americans land on Venus only to discover that the Russians are in need of medicine and assistance. The mystery on whether Venus is sporting the inner rings of Hell or the atmosphere of Central Park comes to fruition as the story reaches its central apex. Unfortunately, it was like a faulty firework on the 4th of July. A bummer instead of a starburst.

There's nothing about To Venus! To Venus! to recommend. The narrative just plods along with no  real enjoyment beyond simple escapism. The finale, which I thought was surely going to be an entertaining sequence of American/Russian cooperation to escape the fiery doom of Venus turned out to be about a paragraph in length. Just when I was fully invested, I turned the page and found an advertisement for more Ace books before the pages flipped upside down. Needless to say, I was underwhelmed with the ending. To Venus! To Venus! isn't Hall of Shame worthy, but it is certainly in the neighborhood. Take a hard pass.