77 Sunset Strip (aka The Cases of Stuart Bailey) 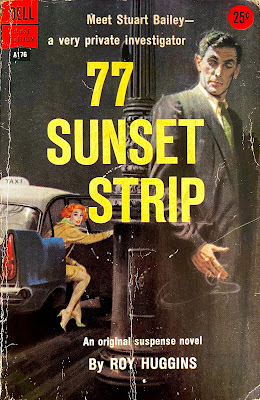 Roy Huggins (1914-2002) wrote and produced a number of popular television shows like Maverick, The Fugitive, 77 Sunset Strip, and The Rockford Files. Beginning in the early 1960s, Huggins became the vice president in the television division at Universal where he worked for 18 years before becoming an independent producer and signing with Columbia Pictures Television. His television career was plagued with denied credit and compensation, leading to a more controlling contract that he created known as the “Huggins Contract”, a template used by other Hollywood producers later.

Huggins dabbled in writing crime-fiction as well. He wrote three full-length novels – The Double Take (1946), Too Late for Tears (1947), Lovely Lady, Pity Me (1949). In The Double Take, Huggins introduced a Los Angeles private-eye named Stuart Bailey. Bailey is hired by a man who is being blackmailed due to his wife's past. Through the narrative, Bailey digs into the woman's past to free the man from extortion. The novel was serialized in The Saturday Evening Post and appeared in a condensed form in the March 1946 issue of Mammoth Mystery.

Bailey appeared three more times in short stories featured in The Saturday Evening Post and Esquire. These three short stories were compiled into a compilation by Mystery House in 2019 called The Cases of Stuart Bailey. There was also a compilation of these stories released digitally in 2015 by Jerry ebooks under the title The Complete Cases of Stuart Bailey. However, the best version of these three stories is the compilation called 77 Sunset Strip. It was published as a paperback by Dell in 1959 and makes the three stories flow seamlessly into one novel. The stories are connected as Bailey weaves in and out of these three assignments while dating a woman named Betty Callister (who appears as a character in the first ten chapters).

I've read the three stories and here are my thoughts on each:

Bailey is invited to a Westwood mansion by a man named Mr. Trist. However, when he arrives at the man's front door, Trist advises him his services are no longer needed and gifts him $150 for his troubles. But, when the man's son appears, Bailey is quickly ushered inside and introduced to a dinner party as an old family friend named Mr. Tate. Just when Bailey finds that the scenario couldn't become any stranger, the lights go out, Trist is stabbed through the heart, and all fingers point to Bailey when the lights flick back on. According to the police, Bailey isn't a chief suspect, but they want Bailey's assistance in investigating the murder. Huggins builds the case around the innovative technique of disguising the murder weapon by morphing it into something entirely different. The story was a bit convoluted and I didn't entirely understand the plot, but Bailey was captivating enough and I enjoyed his interaction with the characters and police.

Bailey receives a telegram from a woman named D.C. Halloran asking him to meet her at a bar in Tucson, AZ. When he arrives for the meeting, he finds that Halloran is a beautiful woman that is suffering from a paranoid personality with depressive tendencies. She feels that someone is looking to murder her and she wants Bailey to find the who, when, where, and how. Against his better judgment, Bailey spends the night with Halloran and awakens to discover her dead. Huggins uses the familiar premise to place Bailey as the chief suspect on the run from Tucson's finest to clear his name. I thought the story was fast-paced with a number of twists and turns. It also showcased Tuscon's night life and landscape of that era, which I found fascinating. Recommended.

This was my favorite of the three Bailey shorts. In this case, Bailey is hired by a boatman named Callister, who feels that his next voyage will lead to his own murder. Bailey takes the case and becomes a passenger on Callister's yacht. The crew is Callister's wife, first mate, and daughter – not exactly a prime suspect list. But, as the pleasure cruise commences, Bailey discovers that each character has a deadly agenda. Sure enough, Callister is fatally shot and it is up to Bailey to survive the cruise while determining who the killer is. I love boat stories and I really enjoyed this trio of characters. The story was tight and slightly confined, but developed into a real showpiece of Huggins' descriptive and fast-paced writing style. Highly recommended.

Huggins used The Double Take novel and these three short stories to develop the Stuart Bailey private-eye character. By slightly retooling the character, he successfully transitioned him from printed page to the small screen. Bailey became the private-eye character of 77 Sunset Strip for six seasons. The show featured Bailey working with another PI named Jeff Spencer out of an office located at 77 Sunset Strip. The show's last season featured episodes that starred only Bailey.

* Thanks to The Thrilling Detective blog for providing some of the author's backstory. You can also read all three shorts online for free HERE.