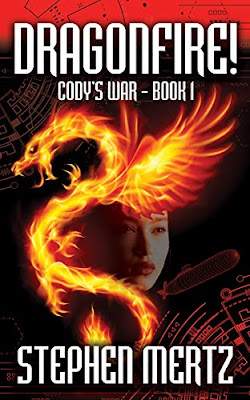 Between 1982 and 1986, Stephen Mertz authored a number of gritty Mack Bolan installments that are considered some of the best of the series. He also created and authored installments of the M.I.A. Hunter series as well as the Kilroy mysteries and music-based novels like Hank and Muddy and Jimi After Dark. Recently, he launched a brand new action-adventure title called Cody's War. I'm always up for a rip-roaring, Mertz mule-kicker, so I chose to read the series debut, Dragonfire!. It's out now through Wolfpack Publishing.

Readers learn through backstory that CIA Agent Jack Cody experienced a personal tragedy when his family was killed by a terrorist bomb. Now, Cody seeks out the most perilous jobs in a quest to kill himself in the line of duty. Thus, his unconventional methods have earned him the nickname “Suicide Cody”.

In the book's opening chapters, Mertz introduces readers to his newest paperback warrior by placing Cody on a small, U.S. submarine en route to the Ocean Song, a recreational yacht containing a wanted Islamic terrorist named Hadi Abu. As Cody emerges from the tiny craft, there is a prophetic message in one simple line of text: “Cody lifted himself through the hatch, into the storm.” It kicks off the novel, the character's mission, this series debut, and puts readers in the harness seat as the author thrusts readers into the action.

On the Ocean Song, Cody disposes of the baddies, captures a valuable female accomplice, and faces off with one of the early Final Bosses. Abu, refusing to go quietly into submission, gets the 'ole one-two punch - a shotgun amputation and decapitation. Cody then thrusts the captive over his shoulder to ascend a swinging ladder to a helicopter spewing out M60 rounds into the Ocean Song's violent, but foolish crew. Wham! Bam! Thank you Uncle Sam.

After the fast-paced opening scene, Dragonfire! settles into a brisk pace as the next mission unfolds. A Chinese scientist is attempting to defect to America and is receiving assistance from a covert CIA agent. As one can imagine, the defection requires stealth support from resistance cells within Red China, an underground pathway that has already smuggled out the scientist's wife. This resistance cell, oddly enough, is backed by the Triad, China's version of the Mob.

The exchange is set that will place the scientist on a road to freedom. However, when the final deal goes down, the CIA man is killed and the scientist is taken captive by a Major Zhao. It turns out, Zhao is working on a coup attempt from within the Chinese military. He will use Dragonfire, the scientist's deadly weapon, to shift the momentum and overthrow the Chinese government in a quest for world dominance. It's a pulp-fiction “take over the world with the biggest bomb” strategy that isn't far removed from an Ian Fleming (James Bond) or Michael Avallone (Nick Carter, Ed Noon) styled plot.

U.S. President Harwood informs his close cabinet that Cody is The President's Man and has been for the three predecessors before him. Harwood elaborates, “He's as well-known in this office as he's unknown to the general public.” So, Harwood gives the orders to Cody's CIA controller and possible love interest, Sara Durell (an obvious ode to Mertz's favorite spy hero in Sam Durell). She meets with Cody, provides the rundown, and hooks him up with an embassy handler named Beth in Hong Kong. The mission is to locate the scientist while investigating the disappearances of an American fighter-jet and submarine, which readers already know were targeted, zapped, fried, and vaporized by Dragonfire. Cody's ultimate goal is to prevent Earth from falling under the bombastic spell of an even viler Chinese dictator.

Needless to say, Mertz is in full rock 'n roll mode with Cody's War. Dragonfire!, while being a modern, sophisticated shoot 'em up, is a throwback to the two-fisted, barrel-chested, bullet-belted heroes of the 1970s through the 1990s. Cody isn't completely exposed in this book, leaving a lot of his past in the dark. But, I love the madness to his motive and the idea that he is longing for his own death while fighting to save the lives of others. There's very little humor (if any) as Cody drills down to the bone marrow to find and eliminate targets. This keeps the book on the rails and moving towards a destination. Readers know the stops. I also love literary-longevity. Mertz has created a durable series hero that he can simply drop into the endless abundance of current Earthly war-zones. Plus, there's the whole “Sara 'n Cody” romance that can build up over time.

In the introduction to Conan of the Isles, L. Sprague de Camp wrote about a lecture he attended on writers. I think this sort of sentiment describes talented authors like Stephen Mertz:

“A lecturer lately has said that, if a fiction writer wants sales, he should write exclusively either about politics or sex. A novel like The President's Boyfriend ought to be a lead-pipe cinch. There are still, however, many readers who read, not to be enlightened, improved, uplifted, reformed, baffled by the writer's obscurity, amazed by his cleverness, nauseated by his scatology, or reduced to tears by the plight of some mistreated person, class, or caste, but to be entertained.”

Whether he's throwing rounds downrange with a literary creation or blowin' the blues harp in a smoky dive, Mertz is an entertainer. With his newest fictional hero, this remarkable scribe ventures down another pathway to offer up another enjoyable, rock-solid good guy during a time when humanity needs more good guys. Jack Cody is that guy.