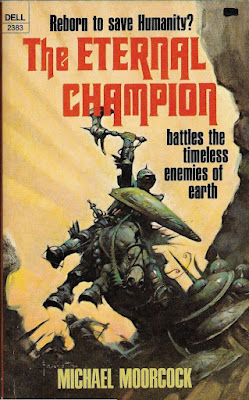 Michael Moorcock is a British science-fiction and fantasy author that began writing novels and stories in the late 1950s. His literary work is mostly composed of series titles that all links to an epic multiverse of various worlds and time periods. I'm familiar with Moorcock through his musical contributions to Blue Oyster Cult and Hawkwind, but haven't seriously dissected his bibliography. To sample his work, I decided to try The Eternal Champion, often referred to as the Erekose series. The trilogy's eponymous debut, originally appeared as a novella in Science Fantasy #53 in 1962. After Moorcock modified and expanded the story, it was published by Dell in 1970 with a Frank Frazetta cover.

The novel is presented in the first-person by John Daker, a man from present day Earth who has been summoned by King Regenos to become a supernatural swordsman known as Erekose, meaning the one who is always there. Daker can remember bits and pieces of his past life, including the various incarnations of himself under names like Elric, Cornelius, Corum, Hawkmoon, and others. Regenos explains that the human race is facing genocide from a race of beings called Eldren. With Erekose's tactical strategy and battleground prowess, mankind can be saved by this messiah.

The sword-and-sorcery adventure places Erekose on a wooden long-ship sailing to the Eldren capital city. En-route, Erekose witnesses Regenos' unethical tactics when he strikes down an Eldren leader during a truce. Later, the humans wipe out the Eldren's seaport city, slaughtering everyone other than their princess, a woman named Ermizhad. With her as a prisoner, Erekose begins to see a different perspective of the Eldren. As the action shifts to the kingdom commanded by Regeno, Erekose questions his purpose and fate.

If you are a casual sword-and-sorcery fan, or just enjoy a great adventure, then you will easily become enthralled in The Eternal Champion. It can be enjoyed as a simple, yet exciting, action yarn without any deep analysis. The formula is somewhat elementary from a sky-level interpretation – hero is born from the ashes, leads the humans to fight the invaders, questions the motives, then becomes an ally of the invaders. It is a fast-paced, swift action-adventure that is absolutely top-notch.

However, Moorcock never goes with the grain. He is always questioning the realms of fantasy and the stereotypical flavors and trappings of the genre. As a deep dive, The Eternal Champion positions Erekose as questioning his cursed fatalism. Why is he destined to live out these tragic lifespans in a cycle of the future becoming the past? Is he mankind's savior in a physical sense? The idea that Erekos arrives in an empty tomb places him in a Christ-like position of immense power. As an authority figure, Erekos must decide who needs saving and if warfare truly has rules. Questions of nobility in war, humanity's self-destruction, and the concept of human exceptionalism arise over the course of the narrative. Moorcock's prose, both ultra-smooth and ripe with imagery, presents an appealing and durable protagonist.

The Eternal Champion proves to be timeless classic and worthy of all the critical acclaim and accolades it receives. As a newbie to Moorcock, I think this book may be the welcome drug into an unparalleled library of epic, thought-provoking literature created by a revolutionary scribe. This is sheer perfection, and I want more.