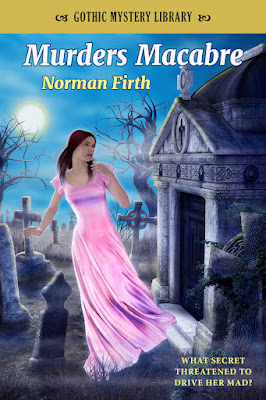 Norman Firth (1920-1949), known as the “Prince of Pulp Pedlars”, was a British author that contributed to small publishers like Bear Hudson, Utopian Publications, and Mitre Press. The diversified writer delved into multiple genres including crime, western, science-fiction, and horror. At one point, Firth accepted a commission to author 30,000 words a month of spicy stories for various magazines. Bold Venture Press has been working with Firth's estate to reprint some Firth's short stories that were originally published under pseudonyms. The first collection is called Murders Macabre, a 200 page volume that contains three short stories with an introduction by Firth's estate manager Philip Harbottle.

This story was originally published in 1945 by Bear Hudson under the pseudonym N. Wesley Firth. Bob Carter arrived in the tiny village of Riverton three days ago and has found himself incredibly bored. During a heavy thunderstorm, Bob pulls his car into a bus station to smoke a cigarette and reflect on his poor decision to visit such a dull place. A beautiful woman named Lucille quickly approaches Bob's car thinking he is a taxi. With a beautiful woman in his car, and nothing planned for the day, Bob casually asks “Where'd you want to go?”. Lucille explains that she is headed to a decrepit mansion called Rivers End to meet her remaining family members. It is here that her late aunt's will is to be read and the inheritance to be divvied out. Her aunt's stipulation was that all remaining family members had to be in the house at the same time for the reading of the will. When Bob arrives at the spooky mansion, Lucille goads him into going into the house with her. Inside, Bob and Lucille experience a long night of bloody, homicidal terror. A phantom with knives for fingers is stalking the halls and killing each family member one by one. With a corpse in the front doorway and the telephones down, the two are trapped with the killer. "Terror Stalks the Night" was absolutely amazing with its blend of violent savagery, eerie ambiance, and slight sense of dark humor from Bob, the stories central character. This was just a superb introduction to the author.

This story was originally published as “Death Haunts the Charnel House” in 1946 under Firth's pseudonym of Jackson Evans. Six years ago, Wenton inherited a ton of money from his uncle's estate. With nothing to do but loaf around all day, Wenton thought it would be fun to become a ghost hunter. He placed an ad in the local paper and soon found himself extremely busy traveling the English countryside proving that most of the haunting and ghost appearances could easily be explained. Only a few cases seemed genuine, although Wenton still retained some doubt. His newest endeavor is Charnel Estate, a haunted habitat that features over 100 workers residing in the Charnel Estate village and working at the nearby factory. Only, rumor has it that the original Charnel Estate housed a murderer, a fiend that used harpoons to impale victims. Now that there's a new owner of Charnel Estate, the old murders have returned again. It is up to Wenton to find the murderer and determine if there's a supernatural aspect to the killings. Again, Firth does an amazing job with atmosphere and location, placing Wenton's investigation in the middle of a rural, foggy English village ripe with suspects and motives. The appearance of this “phantom” was terrifying, despite the very real possibility of the Scooby-Doo styled ending. Regardless, the suffocating tension, horror tones, and grisly murders were worth the price of admission. This was a fantastic story.

"The Devil in Her"

This story was originally published in 1945 under the pseudonym of Henri Duval. Dr. Alan Carter arrives at an English lodge to recuperate from the horrors he witnessed treating ill patients in third-world countries. The lodge is a family friend's place, a household that Carter frequented in the past. Once there, he begins to hear rumors of a witch prowling the moors killing livestock. Once Carter reunites with a former lover named June, he begins to think she herself may be the witch. Once the victims shift from animals to humans, Carter is thrust into the investigation to determine who the killer is and the motivation. The suspect list grows to include a therapist named Calatini, a rival that impedes upon Carter for the affection and love of June. There are plenty of slayings before the story's stirring finale. This was a solid story filled with suspicions, murder, re-kindled passion, and the tropes of an old-fashioned detective tale.

I hope Bold Venture Press will continue compiling Norman Firth's short stories for future collections. I thoroughly enjoyed Murders Macabre as an introduction to this talented, seemingly forgotten author. If you love traditional horror and the weird menace type stories of Bruno Fischer, this is a mandatory addition to your reading collection.