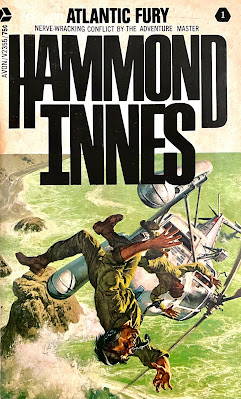 Author Hammond Innes would spend months researching and visiting obscure parts of the world in preparation for his adventure novels. Typically, Innes likes to keep things frosty, evident with his novels The White South, The Land God Gave to Cain, and Fire in the Snow. Thus, the northern hemisphere was a popular destination, including the rocky Outer Hebrides islands, positioned off the west coast of mainland Scotland. This rugged, rural terrain is the backdrop for Atlantic Fury, a mid-career novel originally published by Collins in 1962.

The first thing you need to realize about Atlantic Fury is that the book's ending is revealed in the novel's first few pages. The account is written in first-person perspective by Donald Ross, an artist and former seaman who explains that a major military disaster occurred at sea and courtroom drama transpired. Ross's narrative reveals the results of his investigation into the wreck and what prompted his participation.

In the novel's first act, Ross is unexpectedly visited by a Canadian gentleman named Lane. He explains that his wife is running in second-place to inherit a ton of money from a deceased relative. The current leader is a guy named Major Braddock, but all attempts to reach him have been met with cold silence. It appears that Braddock just isn't that interested in the will, but can't be excluded without proof of death. Interestingly enough, Lane explains to Ross that he has evidence that proves that the real Braddock actually died years ago in a boating disaster. The man pretending to be Braddock now is Ross's brother Iain. That's a real pitch, but what makes it a curveball is that Ross's brother died years ago. Did Iain fake his own death and become the deceased Braddock to fool authorities?

I would imagine that this type of story has been told before, the one where the guy condemned to the gallows figures out a way to swap identities. However, Innes does what he does best by incorporating all of the harrowing elements to create the perfect escapism – roaring storms, nautical disaster, brutal survival, and the obligatory harsh and unforgiving landscape. Innes understood his audience and what was needed to delight his loyal fan base. It's like Lionel White providing thieves and bank jobs to please the readers of his riveting heist novels. But, Innes captures a certain lonely and tragic essence with the characters he creates.

Ross exhibits a deep longing for the fictional Laerg, an island making up a part of the Outer Hebrides chain. His attempts to reach it is either counter or parallel to his minimalist lifestyle depending on perspective. Ross is a single starving artist living in a small apartment, yet longs for Laerg's isolated, uninhabitable landscape of perilous rocks and beaches. It's also a trip into his past to determine his brother's connection to the island. If Laerg is a solitary confinement, then Ross is just bringing his sheltered lifestyle to another place. Or, does the island represent some sort of artistic freedom, liberating Ross from his confined space? Examining the other novel's strengths may reveal certain characters that would rob you of reading pleasure.

Atlantic Fury isn't top shelf Innes, but for any other high-adventure author it probably is. Innes was simply that good and proves it with a stellar catalog. There's plenty to like about the novel considering the central mystery, as revealed as it is, and the abstract, unique adventurers. Recommended.