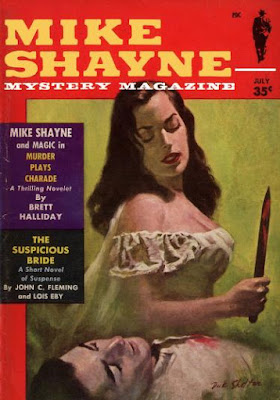 Crime-fiction author Dan J. Marlowe's best literary work was the period between 1959's Doorway to Death and 1969's One Endless Hour. I've read many of the 15 novels Marlowe produced during that 10 year span, but I haven't explored his numerous short stories for the likes of Alfred Hitchcock's Mystery Magazine, Man from U.N.C.L.E. Magazine, and Ellery Queen Mystery Magazine. According to philsp.com's excellent database, “Scratch One Mark” may have been Marlowe's first published short-story. It appeared in the July, 1959 issue of Mike Shayne Mystery Magazine. Thankfully, I had the opportunity to read it at archive.org.

The 13 page “Scratch One Mark” story features Joseph Conway as the youngest police lieutenant in the state (presumably New Hampshire, Marlowe's home at the time). Conway is a no-nonsense tough guy that is dating Judge Schofield's daughter Ann. Every Wednesday morning, Conway receives a small white-envelope containing $150 of hush-up money to ignore the backroom gambling at the local hardware store. Everyone knows about the game and even Judge Schofield and Conway both play from time to time. It's innocent enough as long as the 'ole boys keep the money at a minimum. Needless to say, Conway is flabbergasted when a player named Ted drops by and explains that some of the guys are in the hole up to $17K.

The news creates a violent chain of events when Conway learns that Judge Schofield's nephew is a debtor to the game. The story centers around Conway's allegiances to the town and his struggles with the new high-rollers while navigating a bumpy relationship with the Schofields, which could be his future family. These conflicts collide in a savage end, but who's the victor?

What's interesting about “Scratch One Mark” is that it is written from experience. Marlowe was a professional gambler for a number of years - arguably the only thing he really did other than watching sports and writing – so there is a realism to the storytelling, a grainy know-how that blankets these seedy characters. In a few short pages, I developed a love and hate relationship for the main character. These are all of Marlowe's strengths, assets he would later develop into his anti-hero Earl Drake in the heist novel The Name of the Game is Death.

“Scratch One Mark” is a short, enjoyable read and a forecast on where Marlowe was heading so early in his writing career. You can read this story for free below or HERE.