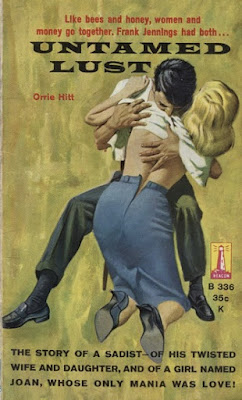 Orrie Hitt (1916-1975) was a family man living in upstate New York barely making a living while he cranked out 150 sleaze paperbacks between 1953 and 1970 — many of which had significant crime-fiction elements. Untamed Lust was a 1960 Beacon Books release by Hitt that remains available today from Prologue Press and as an audiobook.

Eddie Boyd is a 23 year-old down-and-out farm worker who arrives at Wildwood Acres looking for a job hunting and trapping vermin on the estate. The master of the manor is Frank Jennings, a wheelchair bound drunk with a contempt for the wildlife he’s hiring Eddie to kill. In any case, Eddie takes the job for $300 a month, plus room and board at the upstate New York plantation.

The maid at the estate is a busty babe named Joan, with whom Eddie used to consort. Now that they’re living under the same roof in the servant’s quarters, they could resume their strictly-physical relationship. Seems simple enough until we learn that sweet Joan has marriage on her mind.

Not so fast! Eddie meets the lady of the house, Mrs. Jennings (“Call me Kitty”), and she’s a sex-on-fire, hot-pants-wearing minx. Then there’s Carole, Mr. Jennings’ conniving daughter, an irresistible sexpot with impossibly big breasts and a small waist. For his part, Eddie finds himself with a set of burning attractions that could cost him his livelihood.

Eventually, Eddie finds himself in the middle of the rivalry between Carole and Kitty for eventual control of the plantation. Eddie is pressured on multiple fronts into taking action that would provide him financial independence and a substantially upgraded sex life — fueled by his ambition and untamed lust for a trio of pulp fiction femme fatales.

Hitt’s novels often contain interesting details about the protagonist’s careers, and this one is no exception. In addition to being titillated, you’ll also walk away with a master’s degree in the art of trapping wild animals. Hitt underscores the cruelty of the practice and uses this as a means to define the characters and their motivations. This is unusually smart writing for a sleaze paperback and the reason why Hitt was so much better than his contemporaries.

Despite being derivative of James M. Cain’s work, Untamed Lust remains one of Hitt’s best novels. The ending was a little tidy for me, but the ride along the way was pure melodrama for imperfect men. Recommended.