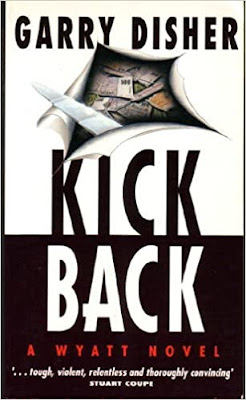 The Wyatt series by Harry Disher was an Australian pastiche of Richard Stark’s Parker novels. The series has nine installments and began with 1991’s Kickback.

If you’re familiar with the Parker books, you know Wyatt’s background. He is a stoic, independent heist man in his 40s who prides himself on his professionalism among a community of scumbags and amateurs in his chosen profession. In Kickback, Wyatt is based in Melbourne, a city with ample opportunities for heist targets, although the underworld is largely under the control of the Syndicate in Sydney.

As the novel opens, Wyatt is pulling off what should have been an easy job. He is partnered with the 21 year-old kid brother of a business associate and the kid sees himself as a real cowboy. As a result of the kid’s malfeasance, the job goes completely sideways and an innocent woman winds up dead. Wyatt vows never to work with the young cowboy (who calls himself “Sugarfoot”) again, but the kid sees an opportunity to profit from intercepting the money on Wyatt’s next heist.

The novel is basically the story of Wyatt looking for that next score amid increasing financial pressure and sparse opportunities. He lands on a bent lawyer with a safe full of cash and a beautiful secretary willing to help from the inside. Can Wyatt pull off this heist, get the girl, and neutralize Sugarfoot before the whole thing goes sour?

I’ve heard people degrade the Wyatt series for “ripping off” the Parker series. However, I feel that there is plenty of room for these types of novels whether they are written by Richard Stark, Lionel White, Max Allan Collins, Dan Simmons or this very talented Australian author.

Inasmuch as Donald Westlake is deceased and we’re not getting any more books from his Richard Stark pseudonym, the Wyatt series seems to be a great way to fill that void in your life. For its part, Kickback is right in-line with the quality of an average Parker book, which is high praise.