Zanthodon #01 Journey to the Underground World 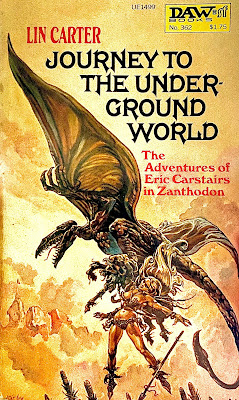 As a longtime fan of science-fiction, fantasy, and the works of Robert E. Howard and Edgar Rice Burroughs, Lin Carter (1930-1988) authored a number of novels and series titles using unfinished manuscripts from his literary idols or by utilizing a pastiche to contribute future installments of established, classic titles. Using the Pellucidar series, written by Burroughs between 1914-1963, Carter created his own “hollow Earth” concept with the Zanthodon series. The five-book run, also inspired by Jules Verne and Arthur Conan Doyle, was published by DAW Books between 1979 and 1982. It has been reprinted by Wildside Press as one of their digital Megapacks featuring all five books for an affordable price. I'm starting with the series debut, Journey to the Underground World.

The book's star is Eric Carstairs, the stereotypical 1970s action-hero that can pilot, captain, shoot, salvage, and deal with the best of them. He's in North Africa looking for work when he saves a professor named Potter from muggers. At the bar, where Carstairs stores his steep tab, he discusses Professor Potter's interesting proposition. Potter explains that he needs Carstairs to pilot a helicopter into an inactive volcano in an effort to locate the middle of the Earth, a place called Zanthodon. He provides evidence that many ancient cultures knew about Zanthodon and wrote about its whereabouts. The origin stems from a giant meteor that crashed to Earth, plunging through the volcano and making an impact on our planet's central core. The “Big Bang Theory” would have created a miniature Earth inside Earth. Make sense? Potter wants to locate it.

Carter doesn't waste the reader's time, and by page 40 both Carstairs and Potter have crashed the helicopter miles below the volcano. They crawl out of the aircraft and discover that Zanthodon is an evolutionary paradox. Dinosaurs roam free, along with two different types of humans – Neanderthal, which are the most basic of prehistoric humans and the slightly more advanced, evolved humans known as Cro-Magnon. As we know it, roughly a 350,000 year difference between the two on the evolutionary scale. But, in Zanthodon they are both alive and active, although warring with each other.

Aside from being a fighting man, Carstairs has a key advantage by carrying a .45 handgun to shoo away the pests. But, the duo is soon captured by the Neanderthals and taken on a long trek through the wilderness. It's here that Carstairs meets Darya, the captive daughter of the Cro-Magnon's tribal king, as well as Jorn, a fierce warrior-hunter. The narrative builds around Carstairs' attempts to become free while working together with an unlikely ally in Hurok. The book introduces future plots while familiarizing readers with the series vibrant and dangerous landscape.

As pure popcorn fiction, there's nothing to dislike about Journey to the Underground World. It obviously pays homage, and takes some liberties, from prior works like The Lost World and Journey to the Center of the Earth. Carter spends ample time with each character detailing the separate perils they are facing. The plot is spacious, allowing multiple events to occur in different areas – different enemies and challenges that rotate for the characters. I really liked that aspect of the storytelling.

As a fast-paced, descriptive adventure novel, Carter delivers the goods. Journey to the Underground World is a journey worth taking. Recommended!