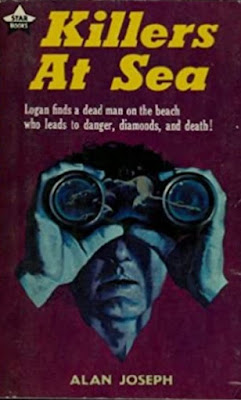 Jon Messmann authored comic books before moving into men's action-adventure paperbacks in the late 1960s. He contributed installments to the spy-fiction series Nick Carter: Killmaster as well as creating and writing his own titles like The Revenger, The Trailsman, and The Handyman. In 1970, Messmann wrote two novels starring a begrudged boatman named Logan. Thanks to Brash Books and Cutting Edge, two publishers that have concentrated on releasing brand new additions of Messmann's literary work, I had the opportunity to read the first book, the eponymous Logan. Enjoying the novel, I'm back to the well again with the book's sequel, Killers at Sea.

Messmann moves the action from Panama to the quiet South Carolina coast for this second Logan adventure. The battle-scarred protagonist receives a letter from an old friend in the fictional one-horse town of Kingdom Point. Upon his return, Logan discovers an elderly man's body lying on a secluded beach. Before he can notify the authorities, the bullets start to fly. The dead man's young friend, a gorgeous woman named Julie, begins taking potshots at Logan believing he is the murderer. Wrestling the gun away from Julie, Logan is then forced to kill one of three savage tough-guys that arrive at Julie's house.

Like a mid 20th century crime-noir novel, Logan unexpectedly finds himself a murder suspect and must prove his innocence. In doing so, Logan is forced to contend with the group of criminals that killed the old man searching for something valuable he possessed. Now, the criminals believe that Logan somehow knew the old man and has the goods. But, how does Julie fit into this robbery and murder? 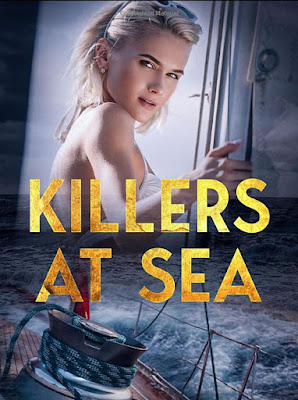 Killers at Sea isn't quite as effective as its predecessor, but still retains the same ingredients. Lots of sex, gunplay, and violence that reminded me of the Netflix original show Ozark. While Logan's signature is his fast boat, The Sea Urchin, most of the book's violence surprisingly occurs on dry land. Messmann's plot development moves at light speed, never pausing for lengthy dialogue. It's a sacrifice of character building in exchange for the pure adrenaline rush brought on by the hero's struggle.

Notes – Despite the book titles, I honestly feel as though Messmann wrote Killers at Sea first, then followed it up with Logan. In reading both books, Killers at Sea is a looser outline of the character. First, a little more backstory is revealed with Logan's charity in Sister Mary Angela. This has the genre tropes of an origin tale. The Logan installment briefly mentions Sister Mary Angela as if readers are already familiar with that character. Second, I'd venture to say that Messmann's writing isn't as good in Killers at Sea as it is in Logan, as if he was still working out the hero's characterization.

There is also the character of Julie, which I find interesting. In this book, Julie is Logan's lover and she experiences violence and criminality before Logan ditches her on an island on the last page. In the opening pages of Logan, he is arriving back at his boat with a girl named Julie. If this isn't the same person, why name two female characters the same? The Julie in the Logan novel doesn't really say much to reveal her past, and she quickly leaves Logan when bullets start flying. It was as if the Julie chapter of Logan's life had reached its conclusion.

The end result is that Killers at Sea was first, Logan second.