First Through Time (aka The Time Factor) 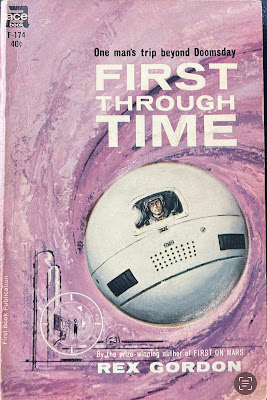 Most time travel stories concern going into the past and the ramifications of altering linear time - always a fun thought experiment. In 1962’s First Through Time, also published as The Time Factor, British novelist Stanley Bennett Hough (1917-1998), writing as Rex Gordon, tackles travel to the future.

Major Howard Judgen works for a U.S. military-funded science unit that has invented a device called a Synchotron that captures images of the future for modern study. Basically, it’s a time machine for a rudimentary motion picture camera. The camera goes through a hole in time created by science-fiction hokum and returns 30 minutes later with video footage of the future.

A recent video that returned from about 100 years into the future indicates a cataclysm has taken (or will take) place at the spot the laboratory now stands in Tennessee with global ramifications (I’m being intentionally vague here). The military wants to utilize this time portal to send a man into the future to avert this catastrophe. Our narrator, Howard, seems to be the man for the job.

The success or failure of a novel with this setup hinges on the coolness of the author’s depiction of the future and the quality of the adventure awaiting our hero. It’s all set-up quite nicely with the appropriate characters trudging up all the time travel paradoxes associated with jaunting to a determined future with hopes of changing it.

The end result was akin to a decent installment of Jeffrey Lord’s Richard Blade series - without the kinky sex. The author tried to shoehorn too many Big Ideas into what otherwise should have been a short, pulpy novel. Overall, First Through Time was a pleasant diversion, but it will be no one’s favorite science-fiction novel of the era.