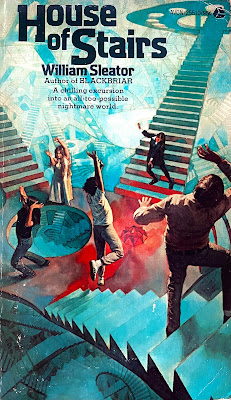 William Sleator (1945-2011) was a Harvard graduate that authored science-fiction and young adult novels from 1970 through 2011. I wasn't aware of his literary work, but was happy to discover House of Stairs at a local used bookstore. It was originally published by Avon in 1974 and has since been reprinted numerous times in multiple formats.

The book consists of five sixteen-year old kids being taken from various orphanages and state institutions and placed in a seemingly endless world of stairs. There are no walls or rails, just platforms connected by stairs that lead in different directions to more stairs. The first to arrive is Peter, blindfolded and shoved from an elevator into this stairway nightmare. Inside the maze, he finds a girl named Lola. Together, the duo stumbles upon another stairway resident, a girl named Blossom. She has found a small, disc-shaped machine that releases a small food pellet each time she sticks out her tongue.

The three are later joined by Abigail and Oliver, and collectively the five of them share a small backstory of how they came to arrive in the maze. Like any novel that places ordinary people in extraordinary circumstances, alliances are formed and enemies are made. In this case, Lola and Peter form a partnership and attempt to exist “upstairs” away from the others. The motivation for alienation is that the food machine changes its preferences on when to deliver the pellets. As the hours morph into days, the group soon becomes starved and forced to abuse each other in order for the food pellets to be delivered. You see, physical and verbal abuse awards the group with food while kindness and generosity produces starvation. The horror!

At 156 pages, House of Stairs is a brisk, macabre little novel that says so much about humanity's will to survive. It was interesting to watch the deterioration of human kindness when pushed to the breaking point physically and emotionally. With the idea that time isn't a factor, a rescue isn't feasible, and escape is impossible, these kids spiral into madness and depravity. It's a young adult novel, but there are some violent scenes and sadistic overtones.

I enjoyed this book a lot and found the central mystery as a propulsive, consistent plot development. I will say it is a bit dated with some situations and the ending left me a bit underwhelmed. If you love survival horror like The Mist or The Ruins, then House of Stairs should provide just enough literary terror to quench your thirst. Recommended.

Posted by Paperback Warrior at 3:59 PM