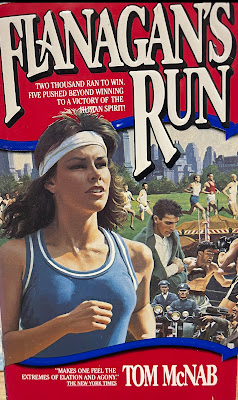 Tom McNab was born in Glasgow in 1933 where he held the Scottish national triple jump record. He coached the British Olympic bobsled team at the 1980 Lake Placid Olympics and was also a technical advisor on the film Chariots of Fire. Most importantly, he wrote a 1982 historical novel called Flanagan's Run about a 3,000-mile foot race from Los Angeles to New York with a big-money prize during the Great Depression. The premise was so cool, I was sold immediately.

The year is 1931 and C.C. Flanagan is a P.T. Barnum-styled huckster organizing “C. C. Flanagan’s Great Trans-America Race”. Distance running was a spectacle back then, and the prospect of winning a $150,000 prize brings 2,000 athletic anomalies out of the woodwork.

Runners from all over the world — including 121 ladies — travel to Los Angeles to compete in the race. The daily distance quota is about 50 miles, and it’s expected that the race will end three months thereafter. The winner is the finisher with the lowest aggregate time over the entire course. En route, the runners live in specially-constructed tents with 100 bunks each.

Some countries send teams of runners. The German racers are from a new political movement known the “Hitler Youth” or “Nazis.” Other characters in the paperback are the kind of colorful eccentrics you’d see in a Coen Brothers movie or the madcap paperbacks of Donald Westlake:

There’s a 19 year-old Mexican running to save his village from starvation.

A British Olympian places a giant wager with aristocrats at home that he’ll finish in the first six places.

You’ll get to know a Scottish runner who was an unemployed riveter in the Glasgow shipyards before the jobs disappeared.

One of the runners is a bare-knuckle boxer from Pennsylvania with an origin story that will please any fan of boxing fiction.

There’s also a medicine-show con-man everyone calls Doc who is an encyclopedia of knowledge regarding distance running.

And don’t forget Kate Sheridan, the sexy New York burlesque dancer seeking to prove that a woman can make it to the money.

Once the race starts, the fun really begins. Flanagan’s carny sensibilities drives him to bring an entire crew worth of bizarre attractions along the route, including a talking mule who doesn’t say much. There’s camaraderie, teamwork, romance and thrills in every chapter as hungry men (and the Beautiful Kate) push themselves beyond their limits in search of glory and money. Along the way, there are literal and figurative barriers to finishing the race as planned. Flanagan’s constant problem solving and the ways he outsmarts his enemies at every turn are a pleasure to read.

I loved Flanagan’s Run, and if you like the triumph of the human spirit sports stories, you’ll love it as well. The book reminded me of a less-insidious version of Stephen King’s The Long Walk. The movie rights to the novel are owned by Miramax. Part of me would love to see the paperback adapted for a film or streaming series, but a bigger part of me doesn’t want the joy of this thick novel sullied by Hollywood’s interpretation. It occurs to me, that’s the biggest endorsement for a book I can muster: Just let it be.