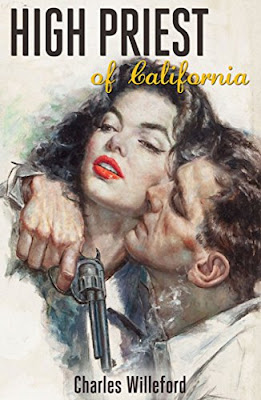 Charles Willeford (1919-1988) began his career authoring novels while serving in the U.S. Air Force. His most popular literary work starred Miami Police Homicide Detective Hoke Moseley. Before that series, Willeford concentrated his efforts on crime-fiction novels that blur the genre's boundaries. Fans and scholars point to Willeford as an author that doesn't necessarily write “genre”, similar to science-fiction author Philip K. Dick's novels that defy a specific genre. The most striking evidence to support this theory is Willeford's first published novel, High Priest of California. It was published by Royal Books in 1953 as a double with Talbot Mundy's Full Moon. Later, it was published by Beacon as a double with Willeford's Wild Wives. High Priest has been reprinted by Phocion Publishing as a $2 ebook.

Russell is a San Francisco used car salesman that embraces his bachelor life. He owns 50 suits, lives in a small apartment, and spends his time reading highbrow literature, deciphering chess movements and translating long, archaic words into modern use while playing stacks of classical music and jazz records. But, Russell has another hobby. He toys with vulnerable women.

At a nightclub, Russell meets Alyce and asks her to dance. He can sense that she's not comfortable under the loud music and lights, so he suggests they go someplace quiet and talk. Russell learns that Alyce was married for several years, single now, works as a cashier and lives with a roommate named Ruthie and several cats. She's an odd bird, but she's slightly attractive.

As the days go on, Russell begins a strained relationship that seems one-sided. Alyce enjoys Russell's company, but refuses intimacy. Things become weird when Russell notices she won't let him inside her apartment. On some dates, he has to drop her off a block away. One night he surprises Alyce and forces his way inside. He's shocked to find that she may have been lying to him the whole time. A man is in her apartment, sitting comfortably in front of the television and behaving like a small child. What's Alyce's secret?

Willeford constructs High Priest of California as a character study. Russell isn't a lunatic, but he has a number of mental issues that are catalysts for his disturbing behavior. While Alyce should be the faulty, deceitful character, Willeford flips the narrative to see which bizarre character can outdo the other. There's a sense that right and wrong are somehow contained in the same scenario, a challenge to the moral code and a misdirection for the moral compass. Willeford plays the characters to tilt, warring them with each other with a type of psychological jousting. Other than Russell's innocent housekeeper, every character has a dark side that either elevates or suppresses their otherwise meager existence.

High Priest of California might be the strangest novel you will ever read. But, at the same time, it could be the one of the most compelling. Russell proves to be one of the most complicated protagonists in my recent memory - a multi-layered, mentally bent character with no empathy blessed with an uncanny power of persuasion. It's Willeford's main ingredient, and the main reason to read this unconventional crime-noir. If that's your thing, this book is a necessity.