The Pavilion at Monkshood 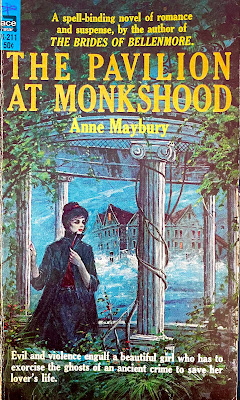 British novelist Anne Arundel (1910-1993) utilized pseudonyms like Anne Buxton and Katherine Troy to author romantic suspense novels. Her bibliography includes over 40 novels penned from 1937 through 1983. My first experience with her is the gothic novel The Pavilion at Monkshood. It was originally published by Ace in 1965 under Arundel's popular pseudonym Anne Maybury.

The novel is set in the obligatory British countryside on a secluded estate called Monkshood. Jessica Lothian, a 20 year old servant, has been summoned by the Herriot family to reside in the home and to look after Aunt Julie and cousin Claudine. Technically, Jessica is a Herriot on her father's side, but nevertheless she seems to function as a sort of “Cinderella” character during her time on the estate. Claudine is the horrible, self-absorbent “sibling” who mocks and scorns Jessica relentlessly. But, the idea is that Jessica will soon marry a dignified young man named Kurt in a fixed, arranged marriage. While Jessica doesn't dislike Kurt, she has no intimate feelings for him.

Throughout the narrative, the Herriots and a close family friend are plagued by a mysterious stalker. This stalker is harmless enough in the beginning, occasionally spying on family members, taking heirlooms, and moving around others. Jessica becomes obsessed with locating the identity of the stalker. But, things turn deadly when the stalker pushes a young woman off of a cliff. Jessica's probe into the mysterious stalker's past leads her to an old tunnel that connects the mansion with a pavilion hosting a bizarre statue of the ancient god Pan.

Through 190 pages, the narrative covers Jessica's interest in the family friend, his business arrangements with growing a fleet of schooners, and a backstory of the Herriot family enduring the loss of their daughter. Aunt Julie's behavior borders on psychosis and there's a number of dances and evening dinners for readers to wattle through.

I've read other reviews of Maybury's novels and they mostly point in the direction of traditional romance. Mostly The Pavilion at Monkshood is a straight-up romance novel with all of the upper-crust white lace and long tassels. But, the stalker portion of the story was intriguing to me and panned out just right to allow for a storybook ending. There is a Lifetime Movie of the Week aura to the plot, but it didn't discourage me. Maybe I'm just a sucker for a dress in distress.