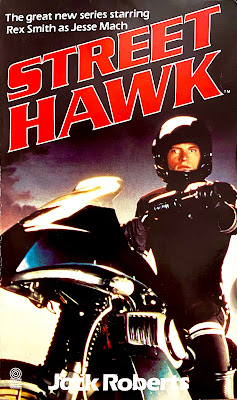 Street Hawk was an ABC television show that aired 14 total episodes in 1985. Many considered it to be Knight Rider on a motorcycle, but that isn't entirely accurate. As a mid-season insert in January, the show had to compete with powerhouse prime-time soap Dallas, which spelled its doom. Despite broadcasting in 42 countries, and possessing a robust, crossover line of toys and merch, the show majorly flopped. But, this isn't TV Warrior, we cover books.

Target Books of London acquired the licensing of Street Hawk in 1985, and published four paperback novels:

I was just nine when the original Street Hawk premiered, and while I remember watching it (infatuated with the intro music) and owning the toy cycle, I don't remember any of the particulars. So, Roberts novel, which is an adaptation of the show's pilot episode, was fresh and new to me. The books are somewhat hard to find, but I was ecstatic to find the first paperback at a used bookstore.

Jesse Mach is a motorcycle cop that runs daredevil competitions in his spare time. Mach and his partner are in a California desert when they ride upon a drug trafficking operation. Mach's partner is killed and Mach becomes disabled and loses his mobility. Forced to take a desk job for the police department, Mach is motivated to find the drug runners that ruined his life and murdered his partner.

Mach's chance for revenge is introduced by a research engineer named Norman Tuttle, who works for the Federal Institute of Law Enforcement Technological Development. Tuttle explains to Mach that he is overseeing Operation Streethawk and Mach has been chosen by the institute to be the test driver. He invites Mach to a clandestine laboratory in the inner-city. It is here that he has developed a sophisticated all-terrain vehicle that, upon first glance, resembles a motorcycle. The vehicle can travel up to 300mph and has laser cannons. The bike's accessory is a high-end helmet that has cameras and GPS. Additionally, Mach is adorned with wrist cannons and the institute properly heals his leg.

In pulpy fashion, Mach has a day job in the department's public relations office and contends with a manager named Sandy that was once a journalist. But during his free time, he investigates the drug running operation and its connections to corruption within the department. Sandy and Mach form an investigative team, but she isn't clued into Street Hawk. By the book's finale, Mach has mastered the machine and can successfully use it to fight crime.

There's really nothing to dislike about this short action-adventure paperback. If you loved the 80s “super vehicle” shows like Knight Rider, Airwolf, and Blue Thunder, then you'll bring out your fan-boy soul by reminiscing about Street Hawk. The book has enough character development and crime-fiction elements to make it enjoyable. I liked the love interest hints between Sandy and Mach and the humorous “mad scientist” predictability of Tuttle. Overall, this was just a lot of fun and totally unnecessary. That's why it is great.