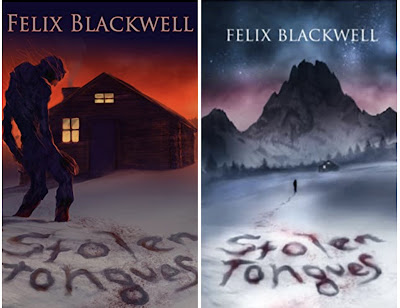 Stolen Tongues is a 2017 horror novel by California native Felix Blackwell. The novel was an outgrowth of a serialized story on the NoSleep Reddit page, and has become a viral hit thanks to fans raving about his work on social media. There’s also a film adaptation and a prequel novel in the works.

The book opens with a prologue that will scare your pants off (pants required). Our narrator is a writer named Felix Blackwell and he is house sitting in a remote cabin with his girlfriend, Faye. While at the cabin, they are menaced by an unseen force in a tension-filled scene. Because the novel doesn’t end with the prologue, our protagonist couple lives to fight another day. Bottom line: Don’t skip the prologue.

Chapter one begins with the same couple, now engaged, headed to another remote cabin atop a Colorado mountain (these people never learn!) for a romantic getaway. The thick woods behind the cabin has plenty of hiking trails that crisscross the frozen mountain jungle. The whole thing sounds legitimately lovely and genuinely romantic until you remember you’re reading an acclaimed horror novel.

The nearby town of Pale Peak is rich in Rocky Mountain Native American history and traditions. The tales of the tribes that once inhabited Pale Peak are rooted in mystery and mysticism. They were a ritualistic people who have disappeared from modern life, leaving only their artifacts behind.

Of course it takes no time at all before the happy couple starts hearing ghostly voices being carried by the wind outside the cabin. Nothing menacing, at first — but you just know it’s going to escalate. The author also effectively and terrifyingly plays with the idea that night terrors, sleep walking and sleep talking can be used as conduits for malevolent entities to infiltrate your life.

The haunting continues after the setting changes, and Felix is determined to get to the bottom of things — even if it means a crash course in Native American mysticism. As is often the case, the paranormal explanations for the haunting are way less satisfying than the haunting itself.

I’d say the first two “haunted cabin” sequences in Stolen Tongues may have been the scariest prose I’ve read in decades. The rest of the novel exploring the source of those two haunts was fine, but nowhere near as compelling or terrifying as the novel’s twin openers. In any case, the author has placed himself on the map as a horror novelist to watch in the future. I look forward to seeing what he does next.