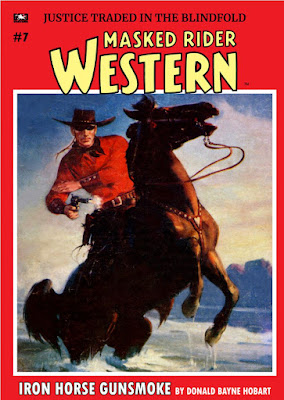 Donald Bayne Hobart (1898-1970) began his career writing song lyrics and poems for romance magazines. His most popular literary work was the 19-year run of Whistling Waddy stories in Argosy. But, Hobart also wrote many novellas for the western pulp Masked Rider Western. My first experience with Hobart is his novella “Iron Horse Gunsmoke”, which appeared in Masked Rider Western, July 1938. The novella was also released as a paperback by Curtis Books in 1965 with a Steve Holland cover. Thankfully, Bold Venture Press has made many of the Masked Rider Western issues available today as affordable reprints. In their series order, this novella is in Masked Rider Western #07 (2022).

In “Iron Horse Gunsmoke”, the bad guys are buried in a feud between the railroad and the ranchers. The C.W. Railroad is clanging steel across the dusty mesa as modern ingenuity tames the wild, wild west. Like all of the traditional beef ranchers, they are opposed to bringing in the trains. However, the two factions benefit from each other. Trains make the beef sell faster and can deliver supplies quickly. The railroad needs cargo to haul, thus the ranchers are valuable. Each gain something from the other.

In an effort to create abrasion, elevate hostilities, and stall work, someone leading a team of masked raiders is inflicting casualties and damage to the railroad and the Bar O. Each party feels that the other is responsible, thus a war brews between these two industries. Hoping to settle the feud and find the culprit, Morgan goes undercover as a cowpoke for the Bar O. As a covert operative, the fast-draw, eagle-eyed gunslinger can hopefully save the day.

Like Norman Daniels, Johnston McCulley, Gunnison Steele, and Walter Tompkins, Hobart proves he can write a Masked Rider Western tale with the best of the pulpsters. There's a lot of over-the-top action, brawls, and tough-guy talk to sop up the story, which in itself is just a traditional pulp told numerous times with different characters.

“Iron Horse Gunsmoke” never slows down, racing through the narrative from the opening run 'n gun scene through the book's finale. If you like western pulps, then you'll love what Bold Venture Press is doing with these classic Masked Western Rider novellas.