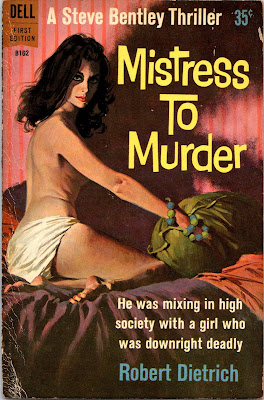 Mistress to Murder, the fourth installment in the Steve Bentley series, was published in 1960 by Dell. The book's author, E. Howard Hunt, wrote the series using the pseudonym Robert Dietrich. Bentley is former military and runs a successful accounting business in Washington D.C.'s turbulent political beltway. While dabbling with stocks and blondes, Bentley always finds himself as a pseudo private-eye working random cases that fall into his lap. In the aptly titled Mistress to Murder, now available in a brand new edition by Cutting Edge, Bentley becomes entangled with a wealthy international family in the posh D.C. suburbs.

From a rural stretch of Northern Virginia blacktop, Bentley sees a young woman fall from her horse. After running to her aid, Bentley is stopped by the woman's chauffeur. Helping the woman into the car, the chauffeur becomes aggravated with Bentley's assistance and nearly K.O.'s him with one punch. Thankfully, Bentley memorizes the vehicle's license plate. Later, back at his home, Bentley discovers that the woman secretly placed a necklace in his pocket.

Consumed with the woman's odd behavior and injury, Bentley hires his old PI friend, and series staple, Artie to locate the vehicle's residence. It belongs to Baron Alejandro Esquivel, located in the high-end district of Georgetown. Bentley goes to the home, receives a cool welcoming, and meets Esquivel's young wife Anita, which eventually leads to a quick make-out session. Bentley pries himself away from Anita and is re-introduced to 19-yeard old Megan, the woman Bentley helped previously. Megan behaves normally, is “sick in bed” due to the fall, and both Anita and The Baron are keeping watch. But, Megan slips a note to Bentley asking him to meet her that night.

At the meeting, Bentley learns that Megan, and her half-sister Anita, are originally from Venezuela. Their father, the original Baron, was partners with Esquivel in a shady, yet lucrative, business. Long story short, their parents were suspiciously killed, Esquivel became the new, yet fraudulent Baron, married Anita and now the three of them live unhappily ever after. Anita cheats on Esquivel and Megan is the princess trapped in the castle. But, the wrench in the gears is a string of pearls that are internationally coveted and now owned by Esquivel. They are a sort of collector's piece worth well over $100K. Like these things tend to go, murders begin, the pearls are stolen, and Bentley is caught up in the deadly ruckus.

Hunt borrows similar plots of the first two Bentley novels. In the series debut, Murder on the Rocks, the plot involves a precious emerald, a South African ambassador and two women searching for the stone. In the series second installment, End of a Stripper, a man being dragged from a strip club discreetly places a small camera in Bentley's pocket. The camera is then traced back to the man and the purpose of the novel. However, Hunt writes Bentley so well that the recycled elements can be easily overlooked.

Mistress to Murder, and the Steve Bentley series as a whole, is excellent crime-fiction written by an experienced, seasoned pro. While Bentley doesn't receive the same fanfare as other private-eye literary heroes, I think his steadfast willingness to do good things for people in peril is unmatched. The crimes are detailed, the characters dynamic, and the pace is flawless. All of the elements contribute to Mistress to Murder's success. This is just another great novel proving that this series is a cut-above your average gumshoe procedural.