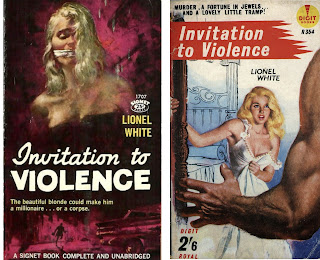 During his literary career, Lionel White (1905-1985) was a master of the heist caper novel, with over 35 books to his name before his death in Asheville, North Carolina. Invitation to Violence was a 1958 paperback that has recently been reprinted by Stark House with an informative introduction by paperback scholar Cullen Gallagher.

As the novel opens, Vince Dunne is a 19 year-old hoodlum pulling off an elaborate jewelry heist with his crew. As usual, the author does a tremendous job bringing the reader along for the ride. As often happens in paperback heists, things go crazy sideways when the cops arrive and the whole joint becomes a shooting gallery. Vince narrowly escapes the chaotic crime scene with the bag of jewels.

Meanwhile, our “hero” (of sorts) is Gerald Hanna, an insurance actuary and all-around square. Fate brings Gerald into the orbit of Vince as the young thief is making his escape from the heist gone sour. While driving home from his Friday night poker game, Gerald finds himself in the middle of the shootout between the cops and the hoods. Young Vince jumps into Gerald’s car and forces the insurance man at gunpoint to be his getaway driver. As they are escaping the scene, a wayward bullet ends Vince’s life, leaving Gerald driving away with a dead heist man and an assload of hot jewels in his passenger seat.

In a moment of impulsive greed, Gerald dumps the Vince’s lifeless body on the side of the road and drives home with the dead man’s pistol and the stolen jewels. Gerald initially takes shelter in his tiny apartment with the hot rocks that everybody spends the rest of the novel seeking.

We are introduced to a small cadre of side characters, including  Gerald’s pain-in-the-ass fiancé and Dead Vince’s genuinely sweet twin sister. There are cops and robbers on the hunt. The author toggles between the third-person perspectives of all these competing parties jockeying for the truth and the jewels.

I enjoyed Invitation to Violence quite a bit. It’s not the best Lionel White offering due to the lack of much violence, action or plot twists, but the machinations of all these characters positioning themselves to come out ahead was very compelling. The ending was tidy and largely satisfying making this one an easy recommendation.