Nude in the Sand 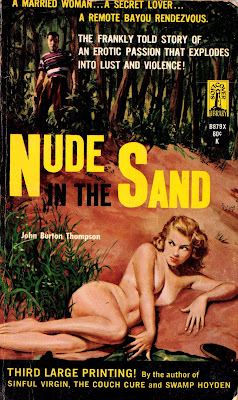 The 1950s and 1960s publishing industry experienced a trend of authors and readers embracing swamp-noir, a concept that features the average man being tempted by a seductress in the backwoods of a rural southern town. Charles Williams and Harry Whittington both excelled in this type of storytelling, which led countless other low to mid-echelon authors to try their hand. Louisiana author and WW2 veteran John Burton Thompson (1911-1994) authored these types of novels. As expensive collectors items now, these vintage paperbacks demand a hefty dollar.

Thankfully, Cutting Edge Books have gained the rights to Thompson's literary work and have made a number of his novels into new editions for an affordable price. After enjoying his 1962 novels Kiss or Kill and Swamp Nymph, I decided to take another swig with Nude in the Sand. It was originally published by Beacon in 1959.

The most entertaining aspect of Nude in the Sand is that there isn't a main character. Instead, Thompson uses the novel to tell many different stories about the backwoods shenanigans of several different characters that have merely six degrees of separation. By the book's end it all wraps together cohesively in a satisfying conclusion that crosses these mini-stories over (and under) each other.

Lecia is a 20 year old vixen living with her mother on a run-down farm. Hope and aspiration are shooting stars rarely glimpsed and never caught. In a bid for money, Lecia's mother sells her off to a wealthy man named Alex who takes the two to his sprawling estate. Lecia is destined to be the despondent, pregnant housewife pushing out babies to create Alex's dynasty. The problem is that Lecia despises Alex due to his violent sexual craving and his affairs with a black slave.

Across the fields is Abe, a retired wealthy man of nobility that has a young black lover named Charline. Readers learn Abe's history with Charline, how he funded her college education, cared for her needs, and is now secretly engaged in a relationship with her. Abe and Charline frequent a hunting cabin where the two intimately share their love. But, Abe understands the age difference and the fact that the town will be thrown in a violent upheaval if their interracial love affair were to be exposed.

Abe's nephew Merrit is a college graduate and artist that hasn't quite found his footing yet. Abe allows Merrit to live on his estate and find himself. Instead, Merrit finds an imprint in the sand made by the nude Lecia. Over time, Merrit becomes obsessed with the imprints and starts to make a bronze statue of this unknown woman. Lecia doesn't realize that her daily visits to this jungle swimming hole are being captured by the imprints she makes in the sand. Eventually, Merrit and Lecia learn of one another and are connected through Abe. When Lecia's husband Alex begins making moves on Charline, the narrative becomes more complex and enticing – Abe vs Alex over Charline. Merrit lusting for Lecia despite her marriage to Alex. There's also another side story of a male slave that hates Alex for raping other slaves.

With this many moving parts, it would be hard for any author to excel at all of these concepts and designs. But, Thompson is such a great writer and purposefully develops this plot into a burning bed of affairs, relationships, violence, and raging sex. The novel certainly possesses enough tropes to make it a swamp-noir, but at the same time it also works as a plantation novel, or what some refer to as a “slave gothic”. Alex's violent encounters with the strong, more domineering slave named Bruce makes for a humorous, albeit savage, thread in the story's web of self-pursuit and sexual gratification. Abe's relationship with Charline is nurturing, but is laced with strong dialogue that reflects the civil unrest of a country at war with itself in the mid 20th century.

Nude in the Sand is a riveting, hot-blooded account of sexual affairs running rampant in the Deep South. With colorful characters and multi-faceted, interlocking storylines, John B. Thompson creates a whirlwind suspenseful romance novel ripe with violence and racial unrest. Fans of Charles Williams, Harry Whittington, and Erskine Caldwell should find plenty to like. Recommended.