A Friend of Mary Rose 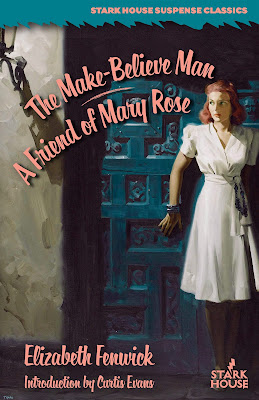 I read and reviewed a 1963 suspense novel, The Make-Believe Man (1963) by Elizabeth Jane Phillips. The author wrote this novel, and many others, under a pseudonym of Elizabeth Fenwick. That novel was issued in a new edition in 2022 as a twofer with another of Phillips' novels, A Friend of Mary Rose, originally published in 1961 and the subject of this review. This edition also features an introduction by literary scholar Curtis Evans.

Mr. Nicholas is a blind, 83 year old man that lives with his son and daughter-in-law. The three of them are moving across town and, as the book begins, the movers are loading up the truck. In keeping Mr. Nicholas out of harm's way between the boxes, handcarts, and movers, Nicholas is ushered into a neighbor's house for safekeeping. Long story short, he spends the night there to reconvene with his son the next day.

Nicholas has some trunks in the attic that he is really fond of. In hopes they have been successfully moved, Nicholas decides to wait until the neighbor is asleep to journey back to the empty house to investigate. When he enters this dark, empty house in the middle of the night, he hears footsteps in the attic. After wandering up the stairs, and into the attic, he discovers a young girl there. She warns him that a harmful man is downstairs in the house and he is searching for her. Nicholas realizes he's walked into some sort of twisted nightmare with this strange girl and this unknown intruder.

I wanted this to be something it's not. A Friend of Mary Rose squanders the opportunity to be this white-knuckle, suspenseful tale of cat-and-mouse between a blind guy, a young girl he's trying to protect, and an intruder. It would have been the ultimate home-invasion story, a plot that would loosely be used in the 1966 play Wait Until Dark, which was adapted into the classic Audrey Hepburn thriller. But, Phillips' doesn't capitalize on this plot thread, but instead just jogs in place with little forward progress. By the book's end, I had become fatigued with the plot development and the safe space Phillips created for these very vulnerable characters.

As a twofer, The Make-Believe Man is a more superior novel and worth the price of admission. A Friend of Mary Rose is a free bonus that isn't a mandatory read, but may be worth exploring if you like Phillips' brand of writing.