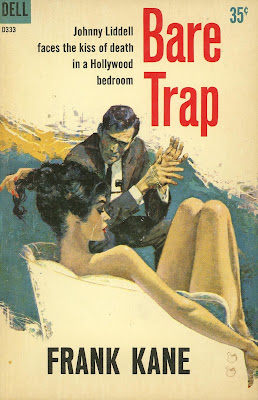 Inspired by the countless private-eye novels and shorts, original paperbacks (and some hardcovers) began appearing featuring heroic detectives solving the outrageous cases. There was Mike Shayne, Mike Hammer, and Lew Archer leading the way. Frank Kane's New York private-eye Johnny Liddell was among the publisher's top echelon, The series ran a total of 29 novels and a multitude of short stories, beginning with 1947's About Face (aka Fatal Foursome). I've read a handful of the novels and mostly enjoy them. I have a slew of the series paperbacks, so I picked Bare Trap to read next. It is the series sixth installment and was originally published in 1952. It was later reprinted in 1965 by Dell with different cover art.

Liddell is finishing up a case in San Francisco when he receives a phone call from series staple and love interest Mugsy. She asks if Liddell can take on a new case in Los Angeles before he flies back home to New York. A young actor named Shad has gone missing and his agent wants the investigation to be hush-hush. If they hire a local PI, the missing kid could make the papers and create a career misstep. With a chance to visit Mugsy in LA, Liddell takes the case.

Shad's agent is a guy named Richards, a fat loudmouth that explains that Shad is set to inherit a ton of money when he reaches the age of 21. There's hints that the kid is in some trouble, but Liddell thinks the disappearing act will solve itself. A few hours later, Liddell finds the kid riddled with bullet holes in the back.

Liddell's case transforms from a missing person's gig to a murder investigation. With the assistance of Mugsy, a local inspector, and a prolific columnist, Kane's hero runs a convoluted gauntlet of blackmail and deception. The road leads to Richards running a badger scheme where he uses a local honey to photograph high-profile Hollywood celebs. He then uses extortion tactics to push the celebs into writing IOUs, which Richards then turns into gambling debts to repay back the mob to settle his own sheets. Got it?

Frank Kane was notorious for recycling plots and Bare Trap is no different. In the series debut, About Face (Fatal Foursome), Liddell is hired to find a missing actor in Hollywood and receives help from a journalist and a coroner. The 'ole extortion bit using photographs or videos is an overly used genre trope, most notably Mickey Spillane's third Mike Hammer novel, Vengeance is Mine. Yet, there's a really abrasive tone to the novel – actresses with cut throats, multiple beatings, numerous fist and gun fights, a knife attack, and tons of shady characters - to keep the reader fully invested. While never particularly dense, I still had to consult a short list of characters to remember who everyone was.

Detective stories can be run of the mill, familiar, and stereotypical, but they still provide a lot of enjoyment for crime-fiction fans. Bare Trap is no exception.