Matthew Scudder #04 - A Stab in the Dark 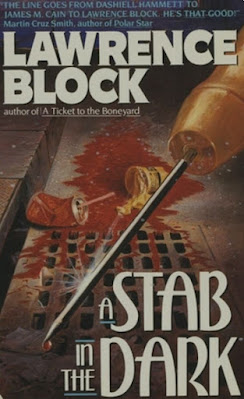 It is revealed in A Stab in the Dark (1981), Lawrence Block's fourth Matthew Scudder installment, that a psycho-killer wielding an ice pick savagely murdered eight young women. Scudder recalls the murders, a killing season that paralleled Scudder's own service with the New York Police Department. But, nine years have passed, Scudder is now an unlicensed, unemployed private-eye doing investigative work for favors or money. He's surprised when the murders are brought to his attention again by a stranger named Charles London.

London approaches Scudder in a diner and introduces himself using a reference from Detective Francis Fitzroy, one of Scudder's previous co-workers on the force. London explains that his daughter, Barbara, was the sixth victim of the “Ice Pick Murderer”. London reminds Scudder that recently a criminal was retrieved by the police that confessed to being the killer. He possessed enough pertinent information about the crimes to legitimately be the infamous killer. However, he presented enough testimony to convince the police that he did not kill Barbara.

In mournful fashion, London advises to Scudder that he is grieving again, as if her murder just happened considering the negative identification of her killer. He expresses that he feels a deep remorse for the way her investigation was treated, and how he has been blindly shuffled to different departments about re-opening her cold case. The police suggest there isn't enough evidence to warrant a new investigation, but London is experiencing mental anguish knowing that someone else killed Barbara for a reason that's simply unknown. He pays Scudder to look into it despite Scudder's warning that this could be a waste of time.

Scudder's trail is ice-cold, and weaves in and out of Barbara's prior life – former neighbors, husband, employer, and friends. It's a slow-pace, with a tepid action scene mixed in, but these Scudder novels emphasize mood, a certain darker ambiance than your typical gumshoe fisticuffs. Block drapes the novel in darkness and a bleak atmosphere that envelopes Scudder's own revered past and its similarities to another ex-cop named Burt. There is also brief comparison to a female artist named Jan, who suffers from alcoholism and a strained relationship with her kids.

A Stab in the Dark is another outstanding installment in the Matthew Scudder series and further proof that Lawrence Block is one of a kind. His character shading, plot development, and crime methodology are superb. If you aren't reading Block...well then you just aren't reading.