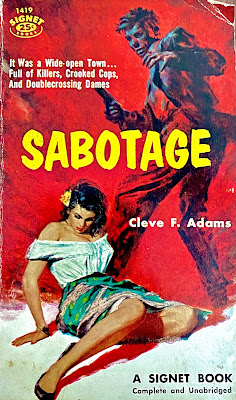 Cleve Adams (1895-1949) was originally a pulpster that broke into writing in the 30s, along with contemporaries like Raymond Chandler and Cornell Woolrich. Adams was the co-founder of a Hollywood literary club called The Fictioneers, made up of other authors like Erle Stanley Gardner, Richard Matheson, and Frank Bonham. Adams transitioned from the pulps into paperback original novels. His serialized pulp story Sabotage, starring private-detective Rex McBride, was converted into a novel version in 1940. It has been reprinted several times, including this 1957 Signet reprint with cover art by Robert Schulz. It can also be found as a trade paperback offered by Altus Press.

The Alliance of Southwest-Pacific Underwriters, which is an insurance company, hire McBride to investigate a high number of costly incidents in Palos Verde, California. The company has insured a construction company to build a large dam. The problem is that the company is bleeding money now due to workers being killed on the job, faulty machinery, and numerous other expensive setbacks.

McBride is considered one of the most repugnant heroes of detective-fiction, with many readers and literary scholars pointing to Adams' racist, fascist, rude, and disparaging characteristics. In Sabotage, McBride gets black-out drunk, quits the job after nearly dying (sort of), and makes passes at every female character. However, Adams presents it in a non-abrasive way that came across innocently enough as nothing more than a humorous flavor.

Unlike the shining stars of detective-fiction, often mantlepieces of brave perfection, McBride is an average guy that routinely gets beaten, arrested, and caught – with his pants down. I think this heavily flawed, often hilarious character is a shining star of imperfection, thus making him immensely enjoyable. His abstract investigation leads through a spiral-network of shady characters and brutish town cops, but somehow makes sense by the book's conclusion.

Sabotage is over-the-top, pulpish, and completely unnecessary. That's why it's a necessity to read if you love this era of crime-fiction. Recommended.