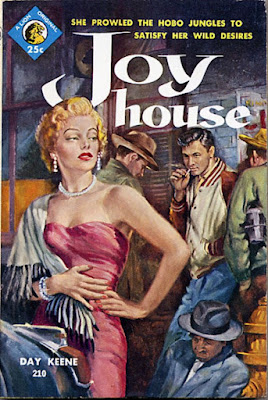 Along with the likes of Gil Brewer, Talmage Powell, Charles Williams, and Lionel White, Day Keene is considered a staple of mid-20th century crime-fiction literature. Keene was one of the most prolific authors of that era and authored a slew of paperback originals during the 1950s and 1960s. His body of work is still respected today, evident with the number of reprint houses clamoring for his estate or orphaned novels. In this Paperback Warrior Primer, we are presenting an overview of his life and career:

Day Keene's parents arrived in the U.S. as immigrants from Sweden. Gunart Hjerstedt was born shortly after in Chicago in 1903. Hjerstedt would later use a modified version of his mother's maiden name of Daisy Keeney to establish his legal name as Day Keene.

Keene became a traveling stage actor in the 1920s, performing under the names of Keene and his Hjerstedt name. His notable role was Rosencranz in a traveling production of William Shakespeare's Hamlet. In 1931, Keene was living in New York and sold his first story to the pulp magazines. His first sales were to Detective Fiction Weekly and West magazine. He returned to Chicago later in the 1930s and started writing for radio shows, including Little Orphan Annie and Kitty Keene, Inc., a program about a female private detective that first aired on CBS and later the Mutual Radio Network from 1937-1941. 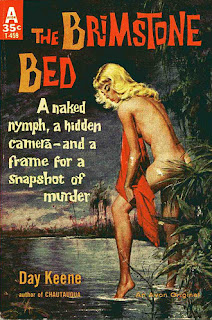 In 1938, Keene relocated from Chicago to St. Petersburg, Florida with his second wife, Irene, who had been a Chicago school teacher. For a while, Keene attempted writing radio scripts remotely, but eventually shifted all of his creative energy to penning stories for the pulp magazines. Keene's writing slowed for a time in 1942 when he enlisted in the U.S. Army in Pinellas County, Florida.

During his pulp fiction era of 1940 to 1952, Keene authored 250 published short stories. He sold another 16 short stories to the digests after the pulp magazines died off in the 1950s. He used the pseudonym John Corbett for stories when there was already a Day Keene story appearing in the issue. Ramble House has a number of Day Keene's short stories compiled into trade paperbacks. You can get them HERE. In the late 1940s, Keene relocated to Los Angeles and subsequently bounced between there and St. Petersburg.

The birth of the paperback original was a catalyst for Keene to switch from short stories to full-length novels. Keene's first novel, Framed in Guilt, originally released as a hardcover - but then quickly re-released as a paperback from Graphic Books. As an aside, Framed in Guilt was released in Great Britain under the title Evidence Most Blind and remains in print today from Stark House Press. In 1951, Keene collaborated with Gil Brewer to write the published novel Love Me and Die. 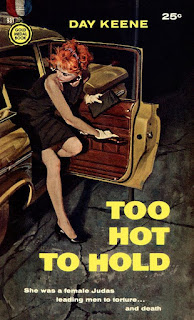 The recycling and expansion of short stories into full novels was common during that time. Keene sold a story called “She Shall Make Murder” to Detective Tales in November 1949. That became the basis for the Keene novel, Joy House, that was written in 1952, rejected by multiple publishing houses, and finally published in 1954 by Lion Books. The novel has also been reprinted by Stark House Press and remains available today. The editor of the novel at Lion Books was none other than Arnold Hano, and our review of that book is HERE. His story "Wait for the Dead Man's Tide" was featured in the August 1949 issue of Dime Mystery. It was later re-worked into the novel Dead Man's Tide, which was reprinted by Stark House Press.

Early in his career as a writer, Keene signed on with a literary agent named Donald MacCampbell, who also represented a fellow St. Petersburg, Florida author named Harry Whittington. Keene and Whittington became lifelong friends and socialized in the same Florida writing clique as Gil Brewer and Talmage Powell. Using MacCampbell, Keene's novels were first offered to Fawcett Gold Medal, who had right of first refusal. If they declined the novel, it would be shuffled down the hierarchy to other publishers like Lion, Ace, Avon, Pyramid, and Graphic Books. In the 1960s, Keene switched from shorter crime-fiction novels to denser, more mainstream novels like L.A. 46 and Chicago 11.

In his life he wrote about 50 novels, over 250 short stories, and 1500 radio scripts. Thanks to reprint houses like Stark House Press, Armchair Fiction, and Wildside Press, many of his greatest hits are still available today.

You can read all of our reviews of Day Keene's novels, including our podcast feature, HERE. For further reading, we recommend Cullen Gallagher at Pulp Serenade. Gallagher wrote an excellent introduction called "Run for Your Life: Day Keene's Wrong Men" for a Stark House Press reprint, which was the source material for this Primer.