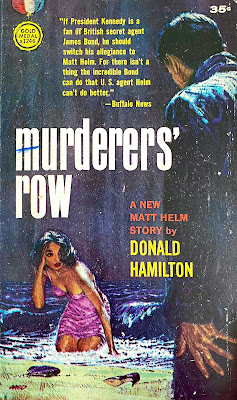 Murderer's Row, the fifth installment in Donald Hamilton's Matt Helm series of spy-fiction, was published in 1962 by Fawcett Gold Medal. The novel was loosely adapted into a film of the same name in 1966. I've mostly enjoyed the series and Hamilton's writing, so I'm continuing in proper order with this installment.

Like the last entry, The Silencers, the next dangerous mission involves a female agent working for the same three-lettered, clandestine organization as Helm. Mac, Helm's boss, explains that the coast of Virginia – Chesapeake Bay – is experiencing an elevated amount of foreign vessels. The theory is that the area is hosting a trafficking operation with foreign powers extracting key personnel from the U.S., including a top-rated scientist with important knowledge regarding American security. The agency wants to locate the scientist and either retrieve or kill him.

A female agent has been inserted into the operation to gain intelligence, however, her perceived credibility has been compromised. Mac, and the agency, need her to regain credibility through nefarious means. Helm is to travel to her hotel room and dish out a scolding punishment from the agency, a savage, violent beating to whip her into shape. The room is bugged by the bad guys, so they will hear and see the beating and realize that this agent does in fact work for the U.S. and is being reprimanded for her poor performance. Mac's last agent, a young rookie sensation, failed miserably on the assignment. Helm is pulled from a Texas vacation to do the job right. Mostly, it all goes accordingly until the female agent unexpectedly dies during the beating.

Helm “killing” a fellow agent creates a tidal wave of issues for him and the agency. Mac attempts a retrieval, and at one point Helm is set-up in an attempt to bring him back to Washington. Helm wants to complete the mission, his superiors feel he is unable to. Against orders, and without support, Helm eventually finds the scientist's daughter, and gets tangled in a wild set of circumstances where he pretends to be a mob hitman named Petroni. There's a dense, complicated family affair between the woman, the scientist, and a bitter married couple. Individually, they each want to pay Helm/Petroni to kill another family member. Surprisingly, Helm accepts the jobs.

Hamilton really threw a curveball into this series installment by creating a unique, nearly comedic approach to the typical spy formula. The female agent dying during the beating was shocking, but where Helm goes after that opening event was just so bizarre and entertaining. Helm's insertion into a high-level, deadly family dispute was amazing, especially considering he agrees to kill two family members for money. It's all for show, of course, but the means to an end is an exciting chain of events that eventually leads from hotels to back-roads, then jail to a boat, then a massive hurricane that bounces the characters around during the book's rousing finale. It was superb pacing and plot development.

Murderer's Row is probably a high-point in the Matt Helm series. It has a really clever storyline, a plausible sequence of extraordinary events, and a deep character study of the family dynamic and the strenuous ties that bind. This one is just fantastic and highly recommended.