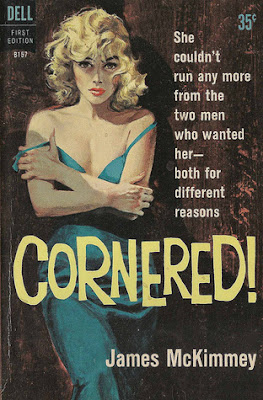 James McKimmey (1923-2011) was a Nebraska native that studied architecture at the University of Nebraska. Later, he served in the 102nd Infantry Division during WW2 and returned home to write fiction for magazines and pulps. His first novel, The Perfect Victim, was published by Dell in 1957. McKimmey would go on to write westerns, science-fiction, and more crime-fiction, some of which have been reprinted by Stark House Press as twofers that we've covered here at Paperback Warrior. In 2016, Stark House reprinted The Long Ride and Cornered! as a twofer. We loved and reviewed The Long Ride and it was just a matter of time for us to read the second novel, Cornered!. It was originally published by Dell in 1960.

Tony Fearon ran a California mob family for years. Instead of allowing his premier gunman, Bill Quirter, to shoot his chief rival, Tony took it upon himself to deliver the killing blow. Inexperienced and enraged, Tony didn't think of witnesses, so he missed the beautiful Ann Burley, who just happened to be walking by. Tony went to prison based on Ann's testimony, and as Cornered! begins, Tony is a few hours away from eating cyanide via California's taxpayers. However, the cool caveat is that Tony has placed a hit on Ann. If Bill (the best gunman west of the Mississippi River) can track down and murder Ann before Tony dies, Tony will filter out a password through the prison so Bill can locate a cool $50,000 for the job. Tony will die happy knowing that the woman who put him behind bars is being killed on the same day. Alternatively, if Bill can't get the job done, Tony will go to his grave as a begrudged man and Bill will be $50,000 poorer (and still unemployed). Cool premise, huh?

I challenge anyone to find me a book with an opening chapter as exciting and memorable as this one. McKimmey's first chapter has Bill and a partner outside of the small Nebraska town of Arrow Junction. It's snowing, both are in a bad mood, and the target is within a few miles. However, a simple accident leads to a furious gunfight in a small gas station and Bill finds himself alone and on the run from the cops. After scampering around in the cold, Bill locates a small diner for shelter. Inside, he points a gun at the customers and stands his ground.

Like The Perfect Victim, McKimmey has this uncanny talent of turning the reader into an everyday citizen of Small Town, USA. Over the course of a few hours, I became a citizen of Arrow Junction and felt like the town pastor, doctor, restaurant owner, station attendant, and fill-in sheriff were all people I've grown up with and had a fond fellowship for. McKimmey is just that good as he smoothly thrusts readers right into the action. In some ways, the book's plot development and through-story reminded me of Bill Pronzini's thuggish writing style. It's gritty, action-packed, and develops into a real slobber-knocker by the book's finale.

Cornered! is one of the best books I've read in ages. Any other plot points or insider wisdom would just ruin the experience for you. Do me a favor – get the book, read it, post comments below. In the meantime, I'm on record to provide the highest possible recommendation for James McKimmey and Cornered!