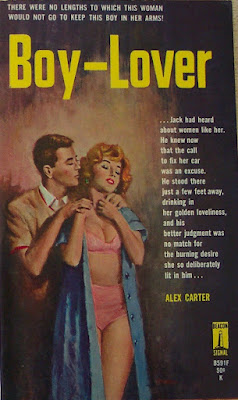 Charles Boeckman (1920-2015), a celebrated jazz musician, authored short stories for the pulps and digests through the mid 20th century. He also wrote paperbacks including mystery, western and suspense. In his autobiography, Pulp Jazz: The Charles Boeckman Story, Boeckman elaborates on the name Alex Carter, a pseudonym that he used to author a number of racy romance novels. In the book, he says he didn't want readers to connect these novels directly to him. He learned of Robert Turner, an author for the publisher Beacon, spending a night in jail for writing “pornography.” He didn't want to experience the same fate. It's a real shame that readers couldn't connect Boy-Lover to Boeckman considering its quality. It was published by Beacon in 1963 with a painted cover by Clement Micarelli.

Jack recently graduated high school and is now working at the local garage. When he delivers Bab's repaired car to her house, he is shocked to find her sunbathing in the nude while Art is at work. Babs slaps the seduction on thick as the experience increases from lemonade to dancing to bedroom antics as Jack loses his virginity to this gorgeous married woman in grand style. But, as you can imagine, Babs and Jack aren't fulfilled with just one encounter. Soon, they are sneaking out to do the nasty in abandoned parking lots, the closed mechanic's shop, and eventually into an apartment outside of town. It's here that Babs and Jack are shocked when their affair is revealed.

Boy-Lover isn't explicit by any stretch of the imagination. It's all PG-13 if it was released today. Boeckman's novel works exceptionally well as a character study – Jack as the inexperienced youth experiencing an accelerated maturity and Babs as the frustrated housewife that feels no purpose. The two need something from each other, but it isn't an emotional connection. Their responses to changes in their lives is met by sex – simply sex, nothing more and nothing less.

Boeckman takes readers through the rocky relationship that Jack and Babs feel. We feel Jack's frustration as a mechanic in a new town - the low wages, the impending poverty, the scorching cement – and sympathize. In many ways, this 1963 glimpse at the lower-class hasn't changed. It's timeless as these problems are eternal for generations of Americans. Jack contemplates the money left over on payday and has to decide if his last savings should be spent on a movie and popcorn. Alternatively, the upper middle-class Babs realizes what blue-collar money is worth. She is used to expensive cars, fine dining, and the ability to shop for high-quality wine and clothes. She faces a new awakening under Jack's small, but hard-earned, salary.

Boy-Lover is way better than it ever has a right to be. The cover is gorgeous, but it doesn't do the author or the publisher any real justice. This is just a fantastic novel that makes you feel a responsibility to the characters. On the last page I felt the impact of these two lovers and the impromptu life they led. I felt their emotional connection, their financial struggle, and the challenges they faced in an unconventional relationship. In a way, this is Boeckman's take on youth, the end of innocence, and the daunting threat of impending adulthood. I really enjoyed it and I think you will too. Recommended!