Hot Summer Night and the Unmasking of Elston Barrett 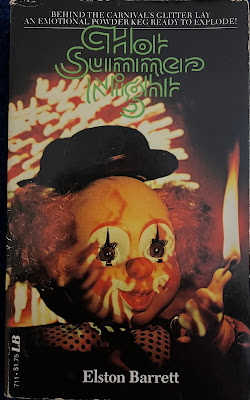 There’s nothing about this 1980 paperback that’s appealing at first glance. The cover photo is embarrassingly bad. A mystifying font choice makes the title, Hot Summer Night, almost unreadable. And the author, Elston Barrett, isn’t a name anyone knows. Is this a horror novel? A carnival thriller? Why would anyone buy this low-budget book and read it?

Actually, I searched rather hard to find a copy of this paperback. I did this because I have a theory about the identity of the author that I wanted to put to the test. I review the book below but first I want to attempt to answer the question:

Who the Hell was Elston Barrett?

I believe that Elston Barrett was most likely a pseudonym. I could find no record of any other novels published under that name. Unfortunately, Leisure Books never bothered to register the book with the U.S. Copyright Office, so that’s no help.

My theory - and I could be wrong - is that Hot Summer Night was actually written by Frank E. Smith (1919-1984), better known to Paperback Warrior readers as Fawcett Gold Medal and Manhunt crime fiction author Jonathan Craig. Here’s my circumstantial case:

In the 1950s, Smith’s literary agent was a guy named Scott Meredith whose clients were the top crime fiction guys at the time (Lawrence Block, Richard Deming, Donald Westlake, etc.). Meredith’s stable of authors also served as the farm team who wrote hardboiled stories for Manhunt where Smith - as Jonathan Craig - contributed a ton of stories.

The success of Manhunt spawned a bunch of other hardboiled crime digest imitators, including Hunted and Pursuit. During the years 1954 through 1956, Smith sold six stories to Hunted and Pursuit that were published under the name Elston Barrett. These would have been logical stories for the Jonathan Craig pen-name, but Smith probably didn’t want to piss off Manhunt who was providing him with a nice living at the time.

During the 1970s, Smith was living in Florida and authoring Gothic novels under the name Jennifer Hale until his death in 1984. If I’m right and Smith was the real author of 1980’s Hot Summer Night, it would have been his last published novel.

There are other things in Hot Summer Night where Smith left his fingerprints behind. First, the book takes place in 1932 in Missouri - not a typical year for a 1980 thriller to take place. It was, however, a year Smith would have remembered from his own boyhood in Missouri where his family relocated during the Great Depression. It stands to reason that Smith was drawing from his memories of struggling carnivals limping through Missouri at the time. I think the Missouri 1932 setting strongly implicates Smith as the author.

I’ll double-down and further guess that Hot Summer Night was likely a Frank E. Smith trunk novel that he probably wrote, but didn’t sell, many years before it’s 1980 publication. He probably blew the dust off the old manuscript, did some re-editing, and sold it for a couple grand to his old friend at Leisure Books while both men were at the end of their careers. The low-end paperback house slapped a crummy cover on the novel, sold a couple thousand copies, and the world forgot the paperback ever existed. The book does not appear in any bibliography of Smith’s body of work.

Anyway, that’s my theory. I could be wrong, but it makes sense to me.

The year is 1932, and the Great Stratton Shows traveling carnival has fallen on hard times. General Manager Brady Stratton is fighting to keep his family business afloat amid competitive pressures and the economic downturn sparked by the Great Depression. The only hope of solvency is winning the contract to provide the attractions for the Cullis County Fair, and Brady has only ten days to raise $10,000 for the participation fee.

There are a lot of plot threads in Hot Summer Night, all of which are quite compelling:

- A black mechanic for the carnival is run off the road by rednecks for allowing a white female carny to ride in the front seat with him. The ensuing fistfight leaves one of the townies seriously injured and the rowdies are looking for revenge.

- Cindy Stratton, the little sister of the family, has a daredevil act where she dives sixty feet down into four feet of water. Meanwhile, she’s facing the distraction of a rich boyfriend from Kansas City. Evidently, a dive that high requires some precision and concentration. Who knew?

- Little brother Tommy Stratton rides loops on his motorcycle in the Globe of Death. He’s jeopardizing the carnival’s operations by making time with a jailbait girl.

- There’s a maniac on the loose planting incendiary devices at carnival hoochie-coochie tents. The maniac is driven by religious outrage believing that the girly shows represent a modern-day Sodom that needs to be destroyed. Can the arsonist be stopped before he turns the canvas tents into a Hell-on-Earth?

- An ex-con one step ahead of the law sees the carnival as a perfect mark for a payroll heist. All he needs is an insider to make it happen.

- A deformed teenage girl is dropped off at the carnival by her family in hopes of finding her a spot in the freak show exhibit. Could this be the girl’s only hope of finding a real family who will love her for herself?

There’s a lot happening in this 240-page big-font paperback. To the author’s credit, the many story threads are all interesting and resolved quite nicely by the end. At times, it felt like a special, two-hour episode of the Love Boat, but I was never bored. Contrary to the dreadful cover art, Hot Summer Night isn’t a horror novel at all. Some of the subplots are very suspenseful, but I found it to be a very mainstream novel with a fascinating settling.

The author clearly took the time to learn about carnival culture and slang. Early in the paperback, he introduces the character of a female newspaper reporter doing a feature on the carnival. She serves as a proxy for the reader while getting up to speed on terms like mitt camp, madball, grab stand, ten-in-one, etc. Anyone who’s into carny stuff is really going to dig this book.

Hot Summer Night wasn’t a literary masterpiece, but it was an enjoyable look at a subculture most of us don’t get to see from the inside. Whether or not it was written by Frank E. Smith or not, it’s an easy recommendation if you can find a copy on-the-cheap.