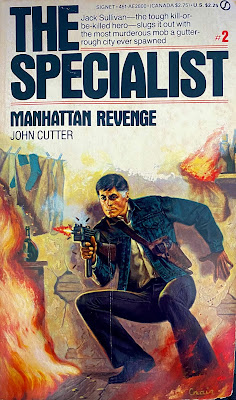 Horror, action-adventure, and science-fiction author John Shirley used the pseudonym John Cutter for an 11-book vigilante series in the 1980s called The Specialist. I read and enjoyed the series debut, A Talent for Revenge, and have waited long enough to revisit this series. I'm picking up chronologically with the second installment, Manhattan Revenge, originally published in 1984 by Signet.

The early installments have a through-story that neatly allows hero Jack Sullivan to fight the villain of the week while still staying on task with his life’s greater purpose. Sullivan's reason to rise and exist each day is the hope that he will eventually locate his lover's murderer, a mysterious villain named The Blue Man. Because of this continuing storyline, readers should be reading the series in order.

In Manhattan Revenge, Sullivan is renting an apartment in a slummy area of New York City when he's approached by a knock-out named Tessa. She runs to his apartment after two men have broken into her place. After asking and receiving his violent assistance, Tessa rewards Sullivan with a sexy romp on the floor (a non-graphic presentation by the author). Afterwards, she introduces Sullivan to a guy in the building who has been asking about him. It turns out the guy is named Malta, and he’s an old ally of Sullivan's when he was working CIA jobs internationally. Now, Malta mostly just sells guns and information and offers both to Sullivan. The job this time recalled some terrifying scene out of Lee Goldberg's second installment of .357 Vigilante (aka The Jury series).

On the Lower East Side, a gang calling themselves Meat Hooks is assisting a sadistic married couple with child sex trafficking in a base of operations informally called The Meat Locker. Malta has learned about the operation due to a child who escaped the facility. The issue with the police learning about the place is that one of the detectives is in on it. If Malta goes to the cops, the bad cop then goes to the traffickers and the kids are possibly all killed in a scramble. Suspending my disbelief at such a preposterous plot, I went all in. And, man...am I glad I did.

Manhattan Revenge is simply awesome. There's a lot happening at one time but the plot is never too dense to be overly-contrived. After taking the job, Sullivan begins killing Meat Hook members one-by-one with a variety of machine guns, sniper rifles, knives and revolvers (his boom-maker is a .357). While conducting hit-and-run tactics, Sullivan also pairs up with a female cop named Bonnie who has an extraordinary ability to shoot and fu...fight. She does the nasty with Sullivan repeatedly. Also in the mix is a tactic often used by Mack Bolan – turning the enemy against each other. By attacking the drug gang calling themselves Bowlers, it interferes with the sex trafficking ring and pits two criminal enterprises against each other.

John Shirley is such a talented storyteller and he clearly received some influences from the crime-noir genre. At one point, Sullivan uses the alias “Richard Stark”, a tribute to Donald Westlake's pseudonym for the Parker series of heist novels. Also, he has Judas Priest playing in a nearby car when Sullivan is searching for gang members. I couldn't help but think Shirley was thinking of the Priest classic hit “Grinder” with the lyrics fitting the story – “Grinder! Looking for meat!” Get it? Sullivan looking for Meat Hooks. Shirley was winking and typing.

The through-story continues with Sullivan learning from Bonnie that a criminal enterprise led by a nickname Blue Man was being run in the Pacific Northwest. During the battle, Sullivan often tells the consumer that he's headed to Oregon in the next installment. That was an invitation that I gladly accepted with my $1.50 token of appreciation at the used book store. Look for my review of Sullivan's Revenge soon.