A Bullet for the Bride 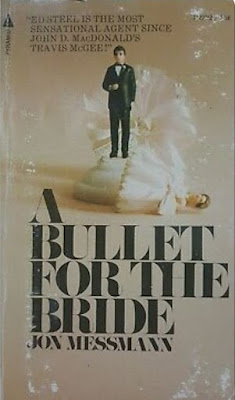 We've covered a great deal of Jon Messmann's literary work, like vigilante novels in The Revenger series, The Trailsman westerns, his Claudette Nicole gothics and Jefferson Boone: Handyman international thrillers. While Messmann's series titles are the most widely recognized, he did write a small number of stand-alone novels for a variety of publishers. Brash Books (and subsidiary Cutting Edge) have performed a wonderful public service by releasing most of Messmann's out of print novels in brand new editions. So, I was excited to acquire Messmann's stand-alone novel A Bullet for the Bride. It was originally published by Pyramid  in 1972 and now remains available through Brash Books with a brand new afterword from Bloody, Spicy, Books writer Roy Nugen.

Despite the book's original cover, A Bullet for the Bride is not a moody private-eye murder mystery. Pyramid clearly wasn't aware of John D. MacDonald's sensational houseboat hero Travis McGee. Or, any houseboat heroes for that matter – William Fuller's Brad Dolan, J.L. Potter's Jeff Tyler or, Messmann's own boating hero Logan, star of Logan (1970, 2022 Cutting Edge) and Killers at Sea (1970, 2022 Cutting Edge). As Nugen suggests in his afterword, this book was clearly designed to be the debut of a series, but it never came to fruition.

The book stars Captain Ed Steele, a retired CIA operative that now lives a fairly peaceful life on The Squid, a houseboat docked in the Gulf of Mexico. Steele still performs part-time jobs for his former CIA boss Byron. These are normally surveillance jobs or tasks that require Steele's efficiency with a boat. But, Steele is surprised when a woman named Cam Parnell calls him on the phone saying that she got his name from Byron.

Parnell, as hot as a July firecracker, wants Steele to do a private-eye job. She wants to know why her super wealthy father's new girlfriend, whom she absolutely despises, is running what appears to be a fake company. Hesitantly, Steele learns that the woman's name is Grace White, a wealthy, sexy older woman that is apparently running a successful exporting business. After Parnell seduces Steele into the job, he discovers that White's business may be a front for an arms-dealer.

I love Messmann's quick-pace and his flawless formula of placing a lone hero against the odds. The chemistry between Parnell and Steele was like lightning in a bottle, a sexy combination of youth, experience, and wealth within the backdrop of Florida's posh beachfront mansions. I also found it interesting that Steele's backstory has him chasing a mysterious man. That story probably would have played itself out in future installments, but they never happened. Instead, Messmann used a variation of this for his successful Trailsman series, where the lone hero Skye Fargo is chasing three murderous men.

Jon Messmann's stirring narrative - laced with boat chases, gun-play and fisticuffs - pairs perfectly with the rich, sexual ambiance of the 1970s. A Bullet for the Bride is truly a marriage made in Heaven.