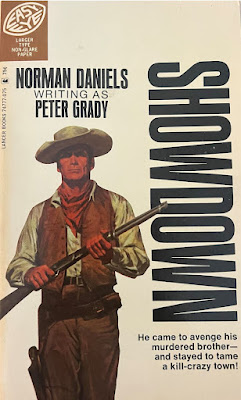 Norman Danberg (1905-1995) was a prolific multi-genre paperback author under the name Norman Daniels. He utilized the pseudonym Peter Grady for a hardcover western called Showdown in 1963 — later credited to Norman Daniels for the subsequent paperback release by Lancer Books.

The novel is set in a small town misnamed Tranquility. The town was once tranquil, but it has fallen into anarchy, lawlessness, and dysfunction. Feuds, disputes, and grudges are settled with shootout duels on Main Street, where the townsfolk gather to watch as if it were a sporting event. Just as Daytona and Indianapolis are known for auto racing, Tranquility is known for its public gunfights and public hangings. The fans love it, and it’s great for business at the local saloon.

Jase Quinlan and Dan Ingram are ostensibly best friends. However, Jase recently went on a trip to visit his brother, and Jase’s whore of a girlfriend has taken up with Dan in Jase’s absence. No bueno. Of course,  all this culminates in one of Tranquility’s famous gunfights, and Jase gets the worst of it.

All of this is a setup for the arrival of Jase’s Texas cowboy brother, Cass. He received word that his brother was gunned down in one of Tranquillity’s bloodsport events, and he’s come for revenge. The first meeting between Cass and Dan is fascinating reading and sets the tone for the novel, which is way smarter and more nuanced than you’d expect. Cass also has another agenda for coming to Tranquility which is one of this novel’s delightful surprises.

Norman Daniels is always a safe bet for solid, if unremarkable, pulp fiction. In Showdown, he threw aside the trappings of the genre and authored a novel about the power of human decency packaged as a simple old-west vendetta tale. While the western genre has always been about frontier justice, Showdown also works as a fable making a case for due process and the rule of law.

Showdown is an interesting western novel if you’re looking for something completely different. There’s not much action or violence, but the story and the themes are unique and the writing is solid. Recommended.