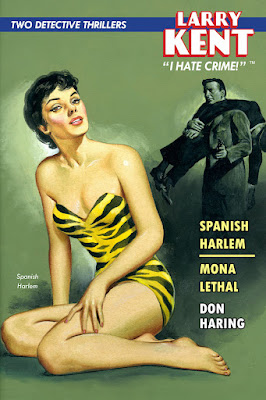 Larry Kent was a hardboiled New York private detective in a long-running series first published in Australia. Many of the novels were written by an American immigrant to Australia named Don Haring, including #751 Spanish Harlem from 1974 currently available from reprint publishers Bold Venture Press (paper) and Piccadilly Press (ebook).

The novel begins with PI Larry Kent being forcibly brought to see a gangster who runs the numbers game in Spanish Harlem. The racketeer’s teenage son has disappeared from a military academy in Georgia, and he needs Larry to find the boy. Kidnapping? Murder? Mob feud? No one knows.

Larry travels down to Dixieville, Georgia, where Greystones Military Academy stands. The missing boy - his name is Phillip - is the “best pass catcher” on the Academy’s football team, so the school is anxious to have him back in pads. Based on the description of the boy’s field position, I gather the author wasn’t much of a football fan himself. It doesn’t take long before Larry is being menaced by a parade of walking southern stereotypes who try to beat him and call him a “nigra lover.”

All roads lead to a racist domestic extremist group called the Sons of the South, who wear white sheets, engage in arson, advocate for sterilization of blacks, etc., etc., etc. Of course they have the local sheriff in their back pocket. Rescuing the missing boy is more complicated than you’d expect and plunges Larry into organized criminal politics among Black Harlem, Spanish Harlem and The Syndicate.

This is a middle-of-the-road Larry Kent novel. It’s not one of the great ones or one of the incomprehensible ones. It’s a bit generic and reminded me of a Mike Shayne mystery without much sex or action. The whole novel is pretty weighted down in racial politics, which became pretty tiresome given today’s never-ending discussions of race. By now, you know if this is your thing or not.